He is a third-party candidate for President running to shake up America’s gridlocked political system, hoping to create a movement on the ground to mobilize voters who are upset with the state of the election. He calls himself Deez Nuts. And he is 15 years old.

Deez Nuts is actually a high school boy in Iowa named Brady Olson, and he’s putting up some of the best third-party candidate numbers in two decades, never mind the fact that he’s 20 years too young to legally be President.

Olson told TIME in an email that it’s no secret in his hometown that he’s the man behind Deez Nuts. “[My] school has been contacted by media so they know,” he said. “My family and friends are taking this well and they support me fully.”

Olson said he decided to run because he is “frustrated with the two-party system,” and the viral momentum of Deez Nuts seems to show that America agrees with him. According to Olson, he’s been contacted by people in 23 states who want to help with the campaign.

This is part of a larger trend in the primary season, in which voters are bucking career politician candidates. Trump, neurosurgeon Ben Carson and former tech CEO Carly Fiorina, the three mainstream candidates who haven’t held elected office, have all also seen polling bumps in recent weeks. For those looking to vent their frustration, a teenager who legally cannot be elected has proven as attractive a vehicle as the other outsiders.

Olson, playing the role, says he has already given some thought to potential running mates if this zeitgeist propels him all the way to the White House. “For my VP, I would choose Limberbutt McCubbins (D-KY),” he said. Appropriately enough, McCubbins is actually a house cat, albeit one with a catchy slogan:

But if the Nuts/McCubbins ticket doesn’t work out, Olson says he would consider taking the Vice President slot himself. “There are only 3 candidates I would drop out for to be their VP,” he said, “Bernie Sanders (D-VT), John Kasich (R-OH), and Gary Johnson (L-NM).” Sanders is a independent who recently became a Democrat; Kasich is a Republican; and Johnson is eyeing the Libertarian Party nomination.

None could pick Nuts as a veep candidate because of his age. As Article II of the U.S. Constitution says of the presidency, “neither shall any person be eligible to that office who shall not have attained to the age of thirty five years.” The 12th Amendment puts the same requirements on the office of the Vice President. “No person constitutionally ineligible to the office of President shall be eligible to that of Vice-President of the United States,” it reads.

“It is possible to erase section 1 of Article 2 through a Constitutional amendment, but [that] is not likely going to happen,” he concedes.

But as he awaits that phone call, Olson is happy to see how far the Deez Nuts campaign can go. So far he’s started a veritable revolution of FEC filings from other fake-name candidates, including the new entries “King Prescott Satan” and “Butt Stuff.”

“It’s great that they want to get involved, and I support their ambitions,” Olson said. “It’s great to know that you’ve made a difference.”

Read next: What Donald Trump Doesn’t Explain About America 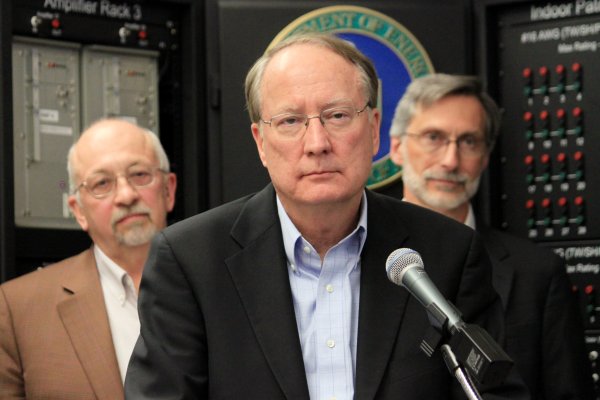