India, Pakistan to Proceed With Border Talks Despite Breakdown of Dialogue, Officials Say

India and Pakistan will proceed with bilateral border talks as scheduled despite the latter calling off a meeting between the two countries’ National Security Advisors over the weekend, official sources said Monday.

The meeting between the head of India’s Border Security Force and his Pakistani counterpart of the Rangers paramilitary force in order to discuss the international boundary between the two countries could take place as early as Sept. 6, the Indian Express newspaper reported.

A scheduled meeting between the adversarial neighbors broke down on Sunday after an impasse over the agenda of the talks, with India saying that cross-border terrorism should be the only item included and Pakistan insisting that the fate of the disputed Kashmir region, which is claimed by both countries, would have to be included.

Pakistani officials had also expressed an intention of meeting Kashmiri separatist leaders in the Indian capital New Delhi, prompting India’s foreign minister Sushma Swaraj to serve an ultimatum saying the talks would not proceed if separatist groups were involved. A separatist leader who landed in New Delhi to meet Pakistan’s NSA Sartaj Aziz was detained at the airport.

Pakistan’s Ministry of Foreign Affairs responded to Swaraj’s ultimatum by calling off the talks, saying the “preconditions” set by India were not acceptable and the meeting between the officials “would not serve any purpose,” the New York Times reported.

This is the second time since Indian Prime Minister Narendra Modi came to power last year that scheduled dialogue has been derailed between the two countries, which have fought three wars since they were first formed in 1947 — two of them over the Kashmir dispute. Modi’s meeting with his Pakistani counterpart Nawaz Sharif at the SCO Summit in Ufa, Russia, last month, where Sunday’s scheduled talks were decided, was hailed as a success but soon came under pressure due to an escalation in the perennial cross-border skirmishes that each country accuses the other of initiating.

The separatist leaders, meanwhile, blamed India for the breakdown of the talks and said no dialogue could proceed without taking into account the viewpoint of the people of Kashmir.

“A message has gone to the world that Kashmir issue is not a bilateral territorial dispute between India and Pakistan and that people of Jammu & Kashmir are the principal party to it,” Ayaz Akbar, the spokesman for the hardline Hurriyat Conference separatist group, told the Times of India newspaper. “The fanatic approach adopted by government is not practicable. How long will New Delhi pursue this policy?”

India’s Home Minister Rajnath Singh, however, pointed out that it was Pakistan and not India that had canceled the talks. 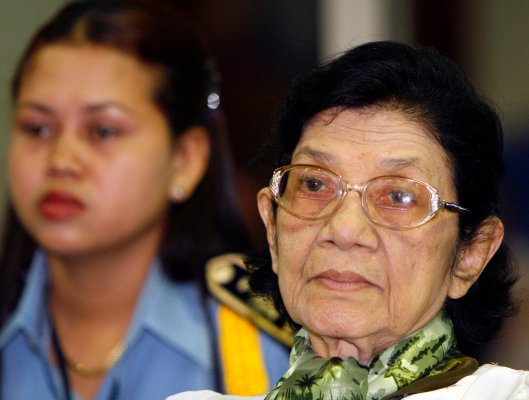 Ieng Thirith, 'First Lady' of Khmer Rouge, Dead at 83
Next Up: Editor's Pick