Rosie O'Donnell poses with her daughter Chelsea at the opening night performance of the Broadway musical "American Idiot" in New York on April 20, 2010
Charles Sykes—AP
By Adam Carlson / People

The man who allegedly housed Rosie O’Donnell‘s 17-year-old daughter Chelsea for a week while she was missing from home has been charged with child endangerment and communication of obscenity, New Jersey prosecutors announced Saturday.

Steven Sheerer, 25, was arrested Friday night in his Barnegat, New Jersey, home and could face up to five years in prison for each charge (or 10 years total), the Ocean County Prosecutor’s Office said in a statement.

The arrest stems from a Friday search of Chelsea’s phone (with O’Donnell’s consent) which revealed “evidence of inappropriate communications over the last several weeks” between Sheerer and the teen, according to the statement.

Sheerer faces two charges, according to jail records: public communication of obscenity and endangering the welfare of a child.

It’s unclear if he has entered a plea or hired a lawyer.

A $40,000 bond has been set for Sheerer, according to jail records. He has been barred from contacting the O’Donnell family, according to the prosecutor’s statement.

O’Donnel’s publicist Cindi Berger commented on Sheerer’s charges in a statement to PEOPLE.

“He was involved with a minor, and Rosie’s concern has been and always will be the health, safety and well-being of her daughter,” Berger said. “Rosie is profoundly appreciative for the work the Ocean County Prosecutor’s Office has done and the diligence of the local police.”

It’s not clear how Chelsea and Sheerer met (an O’Donnell source told PEOPLE it was online), but O’Donnell “is very concerned about the guy [Chelsea] was found with,” the source said, adding:

“Rosie is extremely concerned about everything and is trying to figure out what to do next.” 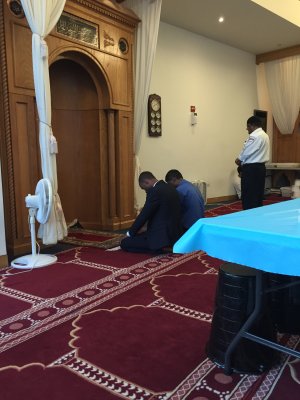 Meet the Worshipers at America's Busiest Airport Mosque
Next Up: Editor's Pick