With the school year starting up again, NewsFeed looks back at some of the most unusual courses that have been offered at colleges and universities nationwide in recent years.

In the class, students read the J.K. Rowling series and went to the U.K. for 10 days to visit historical places that inspired the books or that can be seen in the films, such as Edinburgh Castle, the Bodleian Library and Christ’s Church at Oxford University and the Tower of London.

“Wasting Time on the Internet”
The University of Pennsylvania in Philadelphia, P.A.
Department: English

No textbooks necessary, just laptops and WiFi. Creative writing students could only interact via social networks, chat rooms and listservs. As the professor Kenneth Goldsmith wrote in a New Yorker article, “We’re reading and writing more than we have in a generation, but we are reading and writing differently—skimming, parsing, grazing, bookmarking, forwarding, retweeting, reblogging, and spamming language—in ways that aren’t yet recognized as literary.”

The formal name was actually “Writing 150: Writing and Critical Reasoning: Identity and Diversity.” One assignment asked students to take five selfies of themselves and write an essay answering the prompt, “How do your selfies produce or obscure a sense of your identity?”

Started in 2007, the course was designed to ponder what YouTube can teach us. Students watched video, posted comments and were encouraged to post their own clips. Professor Alexandra Juhasz described the video-sharing site as “postmodern television,” noting its “architecture and ownership undermine the fundamentals of academic inquiry.”

The course would attempt to position Beyoncé “as a progressive, feminist, and even queer figure” by analyzing her songs and music videos “alongside readings on the history of black feminist struggle in the U.S.” in order to try and answer the question, “Can Beyoncé’s music be seen as a blueprint for progressive social change?”

A pun-filled course description billed the 2012 class as an exploration of “the ‘hyper self-awareness’ unique to The O.C. and analyze Californian exceptionalism and singularity in history and popular culture, girl culture, 21st century suburban revivalism, the indie music scene . . . We’ll also travel south to Laguna Beach, behind the gates of Orange County’s private neighborhoods of the Real Housewives, up to The Hills of LA, to get like, really real, and finally to New York City for a serene(a) ride to get out of the bla(i)ring sun. You know you’ll love it, xoxo Your Instructors.”

The child star turned pop diva has been used to study “the interplay among race, class, and gender, as well as taking a feminist critique of media and sociology of media approach to the Miley ‘problem.’” When the course made headlines in 2014, TIME pointed out to critics that “primary sources — material produced by the person being studied or in the time period under consideration, rather than by someone thinking about the subject later — are a cornerstone of good academic practice. Cyrus’ impact on society is only a few years old, and most of it has been documented online, so pretty much every primary source is easily available to study and interpret.”

Students have read works by Wordsworth, Dickens, Tolstoy, Kant and embarked on “historical” and “philosophical” walking tours through parks, gardens, museums and even cemeteries to get students to “stop focusing on constantly doing and concentrate more on simply experiencing” — a message that resonates in the smartphone era. It has also been taught in France and Germany as part of study abroad programs.

The class has used the show to discuss “Newton’s and Einstein’s physics, the Standard Model of particle physics, and the physics that underlies inertial dampers, transporter beams, warp drive, and time travel.”

One question this course on the rappers’ relationship aimed to discuss: “How is what they do similar to and different from what poets do?”

Wordsmiths have played Boggle, Scrabble and shared their favorite examples of wordplay in other languages with the goal of cultivating a better understanding of how language works. As the professor Joshua Katz told a Princeton alumni publication, “I’m making things up because I’ve never taken a class on these things.” 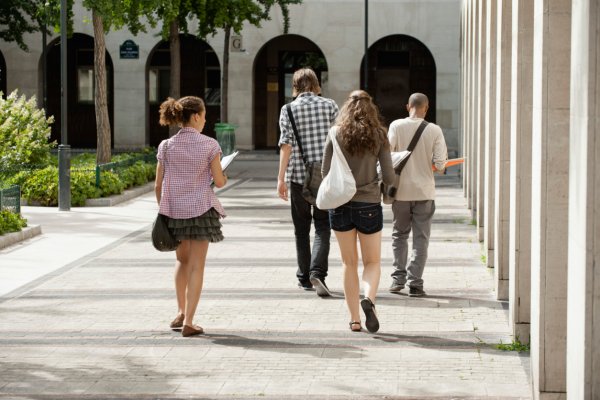