Thousands of Dead Fish Wash Up on Tianjin's Shores, a Week After the Blasts

Thousands of dead fish have washed up on the shores of the northern Chinese city of Tianjin, eight days after a series of deadly explosions at a warehouse killed at least 114 people, injured hundreds more, and left 69 people, mainly firefighters, still missing.

Photos shared on social media have racked up thousands of views since Thursday and show large numbers of dead fish gathered on the banks of the Haihe River, about 4 miles from the blast site, reports the state-run newspaper China Daily.

The huge die-off of fish has led residents to worry that toxic chemicals from the blast could have contaminated the waters around the city — the world’s 10th largest port.

Chinese authorities have confirmed that the warehouse at the center of the blast stored about 40 different hazardous chemicals — among them were 700 tons of highly toxic sodium cyanide, the New York Times reports.

But local environmental officials said they found no toxic levels of cyanide in the water where the dead fish appeared, although they were still investigating the precise cause of the mass deaths.

Den Xiaowen, director of the Tianjin Environmental Monitoring Center, said it was not unusual to see large quantities of dead fish in summer.

“When the temperature rises, oxygen will evaporate and fish may die of hypoxia,” he said at a press conference Thursday.

Authorities announced Thursday that eight out of 42 water-quality monitoring sites set up around the blast zone detected excessive levels of cyanide, with one site exceeding 356 times the normal level. Cleanup teams have set up quarantined zones to block the cyanide-tainted water and were still working to decontaminate the area, reports the state-linked Global Times. 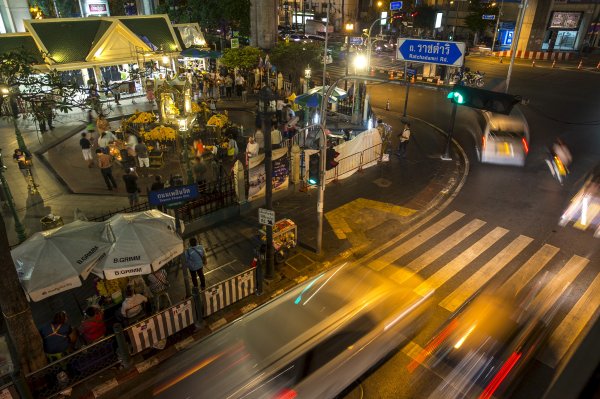 Two Suspects in Bangkok Bombing Cleared of Suspicion
Next Up: Editor's Pick