Get the Government Out of Public Broadcasting

Muppets at a charity event in New York City in 2012.
Andrew H. Walker—Getty Images
Ideas
By Jim DeMint
Jim DeMint is the president of The Heritage Foundation.

Big Bird, like the dodo, doesn’t fly. But he may now fair better than the ungainly fowl last seen in Mauritius in the 1600s. That’s because Big Bird has migrated to HBO, leaving behind the unchallenging environment of public broadcasting.

The dodo became extinct because it was flightless. It was flightless because, facing no predators or competitors for centuries on an isolated island in the Indian Ocean, it forgot how to fly. Once European explorers and their dogs showed up on Mauritius, the bird was hunted down mercilessly.

To avoid this fate, Sesame Workshop, which produces Big Bird and all of the Muppets on Sesame Street, struck a five-year deal that will make the children’s program available first on HBO, injecting an undisclosed amount of cash into Sesame Workshop. The episodes will still air on PBS several months later.

Sesame Street was already a quality show, and its dependence on government subsidies has been comparatively small for years. It received only about 10% of its production costs from PBS member stations. But innovation was lacking in the public nest.

Market competition is what drives innovation and maintains quality. A steady flow of government subsidies — be it for entertainment, education, art or business — can give you a comfortable living. But by inoculating you from competition, it saps the incentive to innovate and create, leaving you stuck with an outdated, over-priced, and ultimately unappealing product.

Mauritius in the 1600s was rather like the world of public broadcasting — indeed, like all of the public sector. You can do anything you want, which is no doubt appealing for a while. Sooner rather than later, though, you forget what the audience wants.

This is another reason, though, that I, and the organization I lead have for years, called for cutting government subsidies to public broadcasting. Yes, the public gets a substandard product as a result of the protection from competition that government supports ensures. But it’s also unfair to the many other media organizations that struggle to produce quality news and entertainment without a government-sponsored bird feeder.

In reality, the Corporation for Public Broadcasting, which oversees both the Public Broadcasting Service (PBS) and NPR (which used to be an acronym for National Public Radio but now stands alone) doesn’t need to be on the dole. It has a membership model that works.

Federal appropriations for the CPB in 2013 were $445 million, of which public television got about $300 million, and public radio stations got about $100 million. That this needlessly adds to our $19 trillion debt is actually a talking point for defenders of public broadcasting’s current model. CPB funding is just a “rounding error,” they say. But rounding errors add up quickly, and if we never cut anything small, getting federal spending under control will be impossible.

This federal subsidy amounts only to about 15% of its revenue, according to PBS. NPR claims federal subsidies made up about 10% of its revenue in 2010. If so, then both can rely on the fees paid by members. People voluntarily acting together to achieve a common good — what conservatives since Edmund Burke have called the “little platoons” of society — can finance public broadcasting if it brings value to their lives.

It will be ironic if a market approach backed by conservatives saves a network that has long boasted a lineup of liberal commentators who have little but scorn for them. But the public accountability that goes with the HBO deal will also produce a more innovative product.

Sesame Workshop must “adapt to the times,” according to series co-founder Joan Ganz Cooney. Indeed it does. Americans don’t need to be lobbied or otherwise coerced (e.g., taxed) into doing the right thing. They know a good thing when they see it, and they’ll support it as long as it fills a need.

The Muppets have saved themselves. The only question is whether the rest of what is now PBS and NPR goes the way of the dodo. It doesn’t have to — if it follows Big Bird’s lead. 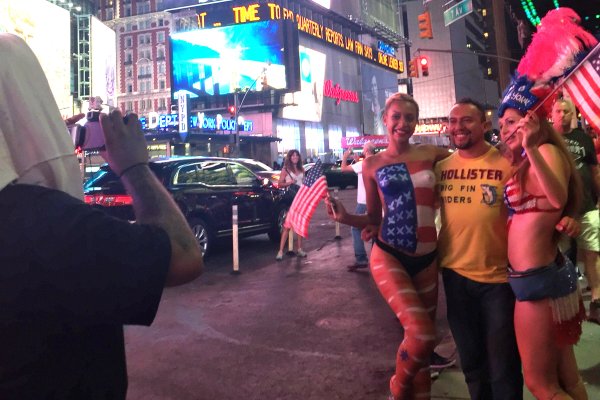 Why One Woman Poses Topless in Times Square
Next Up: Editor's Pick