People Are Still Exposed To the Teflon Chemical At Unsafe Levels, Group Says

It’s been more than a decade since investigations revealed that Teflon contained a consumer chemical called PFOA that was linked to birth defects, heart disease and other health issues, but the safety of the chemical is far from settled. PFOA is dangerous at concentrations far lower than previously recognized, according to a recent investigation.

The investigation, conducted by the Environmental Working Group (EWG), found that exposure to PFOA is harmful at levels 1,300 times lower than previously recognized by the Environmental Protection Agency (EPA). Tests found PFOA at unsafe concentrations in 27 states affecting more than 6 million people, according to the EWG.

“It may not be an absolute like asbestos or lead, which we know there is no safe level of exposure, but it’s very close,” says Bill Walker, author of the EWG report on the investigation. “It appears that even the smallest levels we’re able to measure have harmful health effects.”

The controversy over PFOA, formally known as perfluorooctanoic acid, stretches back decades. DuPont and 3M had been using the chemical to make consumer products resistant to liquids when an investigation tied to a lawsuit revealed the product’s dangerous effects on human health. PFOA disrupts normal functioning of the endocrine system and has been linked to birth defects and cancer.

In the aftermath of the lawsuit, the EPA warned about potential dangers of PFOA and PFOS, a related chemical, in an advisory. Both Dupont and 3M stopped using PFOA and PFOS, but the chemicals lingered in rivers and and waterways (as well as in human bodies). The EWG says more than 6.5 million people are served by water systems still contaminated with unsafe levels of the chemicals.

Harvard School of Public Health professor Philippe Grandjean, who has led some of the most important research on these chemicals in recent years, says that PFOA and PFOS still pose a threat to human health. “You can discuss these numbers, but we’re on the same page,” he says of the EWG figures. “The EPA limit is way too high.”

In a recent study, Grandjean found that breastfeeding passes a related chemical to babies. The chemical builds up in babies with each month after birth and will likely stay in the body for years, the study found. “It’s an absurd situation,” he says. “We think that breastfeeding is the best way for a child to start post-natal life, but we now must tell women to worry about chemicals they’ve never heard about.”

In the report, EWG also called on consumer product manufacturers to stop using chemicals in the same family as PFOA and PFOS, known as PFCs. Though slightly different in structure, these chemicals serve the same function in consumer productions, they said, and preliminary research has shown they likely also have the same detrimental effects on the human body.

In the U.S., chemicals are regulated under a standard that might be called “innocent until proven guilty,” says New York University professor Leonardo Trasande, who wasn’t involved in the study but researches people’s exposure to chemicals. Manufacturers can use them until problems arise rather than need to prove they are safe. Other chemicals, like BPA, have been replaced due to negative health effects only for researchers to discover that substitute chemicals cause the same problems. Legislation to change the approach to regulation is stalled in U.S. Congress.

“Are we going to find out in 50 years or in less time that these alternatives, the new generation of PFCs, are just as dangerous?” Walker asks. “It just seems like just a real egregious failure of the law.” 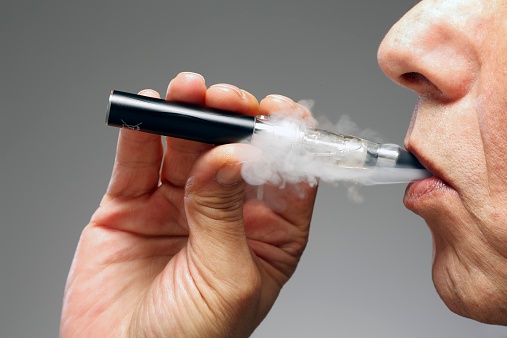 Health Watchdog Group To Challenge E-Cig Manufacturers in Court
Next Up: Editor's Pick