As part of Hillary Clinton’s central campaign vow to rein in student debt and cut the cost of college, the Democratic frontrunner announced a plan Thursday to expand the AmeriCorps service program and increase aid to program participants for education payments.

Clinton’s $20-billion plan would triple the number of AmeriCorps service members to 250,000, according to Clinton’s campaign. It would also increase aid payouts to AmeriCorps participants for college loans from a maximum of $11,550 to more than $23,000.

“Young people willing to commit to public service deserve to live free from the crushing burden of student debt,” said Clinton in a statement Thursday. “In the same way we provided for our returning veterans with the G.I. Bill, we must commit to those who serve our communities at home.”

Many AmeriCorps participants live on paltry budgets, earnings minimal cost-of living allowances that can amount to less than $1,000 a month, depending on their location and assignments. Jobs in the program, which was started under President Clinton in 1994, can range from disaster response and legal aid to academic support in public schools.

AmeriCorps also awards service members with lump payments to pay off student loans. “Too many students graduate college with crushing debt,” wrote former volunteer Kendall Cloeter in a Medium post cited by the Clinton campaign. “AmeriCorps provides a unique opportunity for both the prospect of education awards to help pay off loans and the ability to put your loans in forbearance while completing service.”

The campaign’s proposal—like several of her proposals announced in recent months—hews close to already-proposed legislation, in this case, the Edward Kennedy Serve America Act. That act was passed into law in 2009 and also called for 250,000 AmeriCorps members, but has since withered due to lack of funding.

Last week, the Clinton campaign rolled out a $350 billion plan that would allow graduates to refinance their debt, encourage states to reduce costs at public universities, lower interest rates on student loans and ultimately guarantee that students of public universities graduate free of debt.

American graduates now face a total of more than $1.2 trillion in student debt, a figure that many economists say is hurting students’ ability to participate and grow the economy. Clinton’s rivals for the Democratic nomination, former Maryland Gov. Martin O’Malley and Vermont Sen. Bernie Sanders, have also called for plans to address the ballooning student debt, with Sanders calling for zero tuition at public universities.

Clinton says the AmeriCorps plan announced Thursday would further help students pay off their loans. The plan will cost $20 billion in the next ten years and would be paid for by closing certain tax deductions and loopholes. 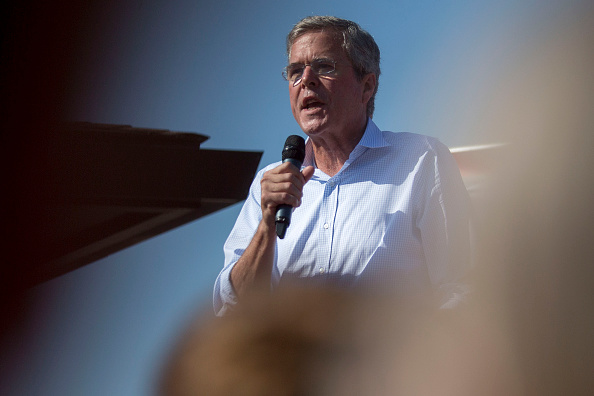 Jeb Bush Turns to Father, Brother for Fundraiser
Next Up: Editor's Pick