Why a Black Lives Matter Activist's Race Is Under Scrutiny

The race of a prominent Black Lives Matter activist has been thrown into question, after photos and documents posted by conservative websites appear to show that he is white and not mixed race.

Shaun King, who built a large online following during the 2014 protests in Ferguson, Mo. following the death of unarmed teenager Michael Brown, has long claimed to be of mixed race, saying his mother is white and his father is black. King, 35, writes frequently for various online publications including Justice Together, which advocates for an end to police brutality against minorities. He also attended Morehouse College, a historically black school.

But rumors have circulated on conservative websites that King is actually not mixed race but white. In the last few weeks, a conservative blogger, Vicki Pate, published what she said was King’s birth certificate showing his father as Jeffrey Wayne King, a white man. Pate’s website, Re-NewsIt!, also published photos purportedly showing King’s father. On Wednesday, the story was picked up by Breitbart, a leading conservative news site.

King did not respond to TIME’s request for an interview but on his Twitter account, he vehemently denied the accusations in more than 30 tweets:

The conservative website The Blaze has also questioned King’s account of an incident in March 1995 in which King says he was beaten by a mob of “rednecks,” which he has described as a hate crime. Documents published by The Blaze describe the incident as involving just one other person rather than group and that King’s injuries were minor. Officers also marked his race as white at the time.

According to the New York Times, the officer said he marked King as white based on his appearance and his mother, who is white.

Along with being a writer for the Daily Kos, King has also written for the Guardian, The Wall Street Journal and the Washington Post.

Earlier this summer, NAACP chapter president and civil rights advocate Rachel Dolezal admitted to lying about her race and publicly posing as a black woman. She later resigned from the NAACP after it was revealed that her parents were both white. 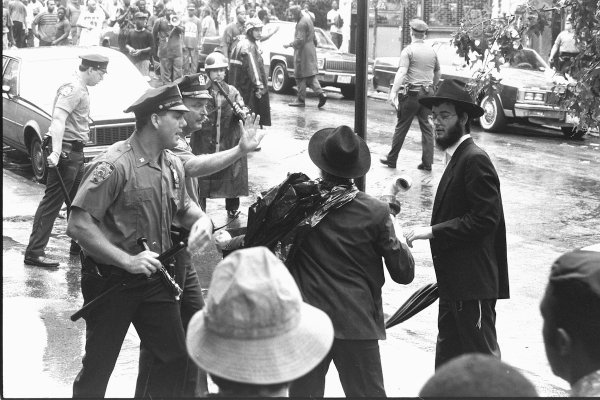 Read TIME's Report on the Crown Heights Riots of 1991
Next Up: Editor's Pick