South Africa’s Justice Minister has blocked the release on early parole of Paralympic athlete Oscar Pistorius in a move welcomed by his victim Reeva Steenkamp’s family but denounced by many legal experts as politically motivated.

Michael Masutha said he had been prompted to look at the decision to release Pistorius to house arrest, just 10 months into his five-year sentence for shooting Steenkamp dead after mistaking her for a burglar, following an appeal from women’s groups. They had argued that given the high levels of violence against women in South Africa, the release of a man who killed his girlfriend during August, which is designated Women’s Month in the country, was “insensitive.”

Pistorius was due to leave jail on Friday but on Wednesday, Masutha stepped in. He said he was not convinced by the women’s argument – after all, the 28-year-old was found not to have deliberately killed Steenkamp so his crime cannot be construed as a gender offense. But he questioned the legality of Pistorius’ release to live at his uncle’s palatial home in a Pretoria suburb exactly 10 months since he was jailed.

Masutha, a qualified lawyer who is no stranger to controversial decisions having this year approved the release from prison of two apartheid-era killers to public outcry, said Pistorius should only have been considered for parole from Friday, not released. “It is apparent that the decision to release him on 21 August 2015 was made prematurely on 5 June 2015 when the offender was not eligible to be considered at all,” he said.

Legal experts have lined up to question the timing of his decision, just two days before Pistorius was due to leave Kgosi Mampuru II prison in Pretoria, undoubtedly mobbed by the international media pack that has followed his case since the fatal shooting on St. Valentine’s Day in 2013. Some have argued that it is standard practice for offenders with short sentences who have behaved well in prison to be granted early, supervised, release to ease overcrowding, and point out it is rare for the minister to intervene in parole-board decisions.

Others have suggested the sudden about-turn was made for political reasons — the powerful ANC Women’s League was among the groups who petitioned the minister.

Read more: The Oscar Pistorius Case: How It All Began

After the decision was announced, the ANC ruling party made no secret of where it stood on the case, denouncing the former Olympic champion as a “murderer” despite the judge’s ruling that Pistorius was guilty only of unintentionally killing Steenkamp. “Murder of Reeva Steenkamp at hands of Oscar Pistorius is a sore reminder of brutality meted out to and vulnerability of many women,” one tweet posted on its official Twitter feed read.

The case will now go to a multidisciplinary parole-board review team made up of judges, lawyers, academics, social workers and victims’ champions, which could take up to four months to conclude.

The ruling party suggested on its Twitter feed that it was a done deal that Pistorius will remain in prison until the Supreme Court considers an application by the prosecution to upgrade his conviction from manslaughter to murder in a hearing scheduled for November. In court papers filed this week, Gerrie Nel, the prosecutor who became one of South Africa’s most recognizable faces during the trial, said he plans to argue that even if the judge did not believe Pistorius intended to kill, she should still have found him to be a murderer because he should have known the likely fatal consequences of his actions.

Pistorius’ large legal team and family have remained tight-lipped about the latest development in a case already characterized by twists and turns more suited to a television drama.

Steenkamp’s family, who celebrated what would have been her 32nd birthday on the day of Masutha’s announcement, welcomed the news with caution, having earlier appealed to the parole board not to release him on Friday saying it “sends the wrong message to society.”

Tania Koen, a lawyer and spokesman for the family, said they applauded the actions of the ANC Women’s League. But she added: “None of that will bring Reeva back. This is what they want everyone to know. So people should not expect them to jump up and down for joy because of this.”

Laurie James-Pieters, an offender profiler and criminologist who followed the Pistorius case closely, said it might be in the athlete’s best interests to stay in prison until the intense public interest in his case dies down and the Supreme Court makes a final decision about his conviction. “While this late decision must have been devastating for a man already suffering from an anxiety disorder, the drama of his release and then possible rearrest two months down the line if the Supreme Court rules in the prosecution’s favor is not going to have a positive effect on his psychiatric well-being,” she said. “There are also a lot of people who feel angry about the case so it’s not clear how safe he would be on the outside. I personally believe it would be better for him to remain inside until the hype dies down.” 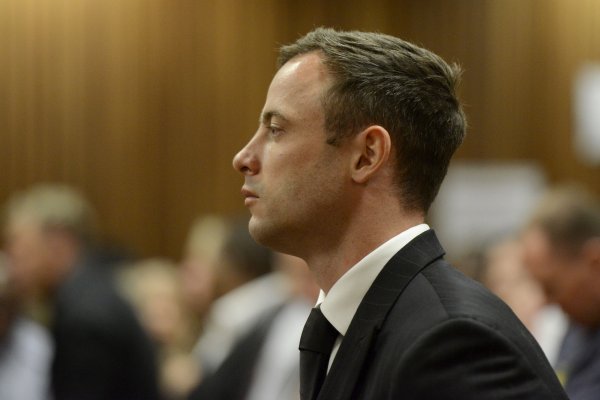