The ‘80s-pop renaissance that periodically seizes the Top 40 appeared to reach its zenith last fall, when a certain country star transitioned to bona fide diva on an album named after the year the Berlin Wall fell. But Carly Rae Jepsen, whose 2012 hit “Call Me Maybe” was so ubiquitous that even President Obama was once asked about it in an interview, might actually be the neon decade’s most dedicated student. Jepsen’s third studio album, E•mo•tion, is full of whizzing, industrial-strength pop songs that raid the musical closets of Cyndi Lauper and Prince and establish the 29-year-old Canadian songwriter as much more than a one-hit wonder.

Some credit must go to Jepsen’s top-notch collaborators, which include the Cardigans’ Peter Svensson (who now crafts hits for Ariana Grande and the Weeknd) and “Chandelier” singer Sia (who breaks from her usual power ballads on the roller-rink-ready “Boy Problems”). Yet the list of those who didn’t make the cut—sessions with Bleachers’ Jack Antonoff and Tegan and Sara have yet to materialize, and the ubiquitous Max Martin doesn’t return after helping out on Jepsen’s last LP—says just as much about the album’s priorities. It’s Jepsen who provides the beating heart of a record dense with stainless-steel beats. Her songs fixate on the nerve-racking early stages of romance, and she finds ample and compelling material between nascent crushes and the DTR talk. Jepsen might as well have called the record Sex•u•al Ten•sion, because these songs—from the stomach-lurching bass of “Gimmie Love” to the intimate pulse of “Warm Blood”—are fueled by it.

That may come as a surprise to some listeners. The unrelenting cheer of “Call Me Maybe,” coupled with her popularity among the Justin Bieber set (the two share a manager), saddled Jepsen with the reputation of a chaste schoolgirl whose PG-rated universe is all sunshine, lollipops and rainbows. (Her 2014 Broadway stint in the title role of Cinderella probably didn’t help that image.) How much of this Jepsen courts herself is up for debate—this certainly wouldn’t be the first time our culture saw a woman with bangs and immediately aged her down or underestimated her. But regardless of the cause, Jepsen keeps things from getting too saccharine by showing off the mature side she previously only hinted at. “I remember being naked/ we were young freaks just fresh to L.A.,” begins the buzzing standout “L.A. Hallucinations,” an account of dating in the public eye that name-checks BuzzFeed and TMZ.

Jepsen’s occasionally cheesy lyrics are the album’s easiest targets. Lead single “I Really Like You” is a better song if you ignore lines like “Sippin’ on your lips/ hanging on by a thread,” but that love-sick goofiness is also very much apart of her charm. When that song was first released in February, detractors quickly declared it the downfall of popular music because it uses the word really 67 times. (“I really really really really really really like you,” goes the chorus. That’s six of them right there.) Never mind that these people aren’t rushing out to burn their copies of the Beatles’ equally repetitive “All You Need Is Love” in the streets—E•mo•tion’s pleasures are simple but not stupid. Jepsen knows the lowest-concept songs can pack the biggest emotional wallop. The thumping “Your Type” would be an otherwise unremarkable tale of unrequited love if Jepsen’s wounded voice—the result of several days of vaping—didn’t make the pain sound raw. And with its surging chorus and irresistible saxophone riff, album opener “Run Away With Me” is even more euphoric than Jepsen’s breakout hit.

It likely won’t be as huge. “Call Me Maybe” is the rare song that comes around once in a career. Instead of topping it, though, Jepsen did herself one better: she made a mainstream pop album that has nary a skippable track. When the songs are this good, that feels like the rarer feat.

A version of this story appears in the Aug. 31 issue of TIME. 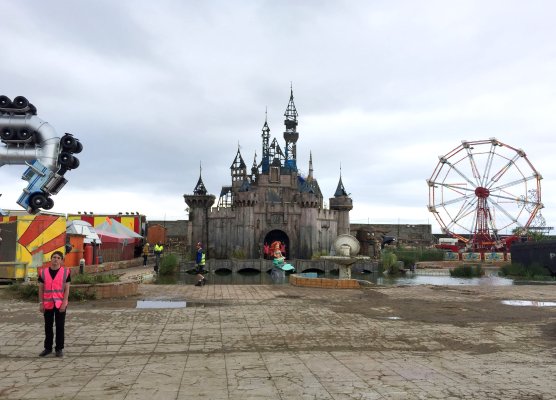 See Inside Banksy's 'Dismaland'
Next Up: Editor's Pick