Illegal migrants who were trying to reach Greece's Kos island, are rescued by Turkish coast guard after their boat sank off Turkey's Aegean coast near Bodrum district of Mugla, western Turkey on August 18, 2015
Anadolu Agency—Getty Images
By Joanna Plucinska

July saw an influx of 107,500 migrants into the E.U., straining thinly-stretched resources even further, reports Frontex, the bloc’s border agency.

The figures have increased significantly since June, when the border agency registered around 70,000 migrants crossing into Europe. Nearly 340,000 migrants have arrived in Europe since January — a huge jump compared to the 280,000 migrants who arrived in all of 2014.

“The pace of arrivals has been steadily increasing in recent weeks,” UNHCR spokesman William Spindler told reporters in Geneva, according to the AFP.

The majority of the migrants come from the Middle East, fleeing conflicts in Syria, Iraq and Afghanistan through Turkey, then crossing the Aegean sea into Greece. The largest concentration of refugees has been on the Greek islands of Lesbos, Chios, Samos and Kos, Frontex says.

Aid workers with the International Rescue Committee (IRC) warn of an increasingly precarious situation due to the unprecedented number of arrivals and the lack of resources to help them, “The situation is already volatile and we have started seeing increased tensions with the local authorities and between different refugees groups,” Kirk Day, the field director of IRC’s ground operation in Lesbos, said in a statement.

As numbers continue to rise, Day hopes that views towards the migrants will grow more sympathetic. “European donors and international institutions need to stop focusing on where these refugees are, and instead remember where they are from — and, what they are fleeing,” Day said. 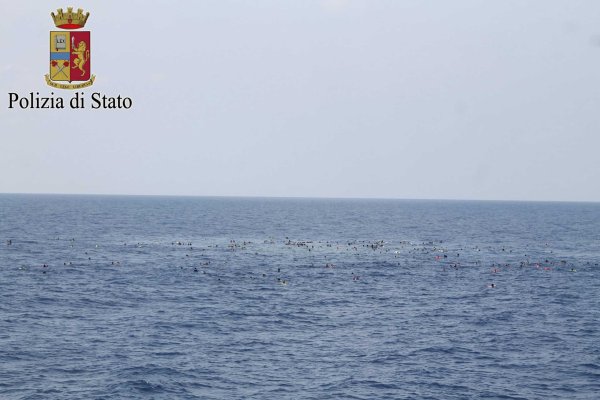 Dramatic Photo Shows Dozens of Migrants in the Mediterranean After Boat Capsized
Next Up: Editor's Pick