Donald Trump remains the frontrunner for the Republican presidential nomination in the latest CNN poll, though many voters worry he wouldn’t be the best candidate in the general election.

The real estate mogul was backed by 24% of Republican voters nationally, followed by former Florida Gov. Jeb Bush at 13% and retired neurosurgeon Ben Carson at 8%.

Another candidate who has never held elected office, former Hewlett Packard CEO Carly Fiorina, saw a bump since the last CNN poll, which was taken before the Aug. 7 Fox News debate in Cleveland. Fiorina, who had previously never gotten more than 2% in a CNN poll, received 5% support.

That was enough to bring her into the third tier of candidates, alongside Kentucky Sen. Rand Paul, Ohio Gov. John Kasich and New Jersey Gov. Chris Christie.

Still, Republicans remain skeptical about Trump’s chances, with 58% saying the GOP would have a better chance of winning the White House with someone else as the nominee, and only 38% saying it would do better with Trump on the ballot.

The poll of 506 voters who described themselves as Republicans or independents who lean Republican was taken Aug. 13-16 by CNN and ORC International and included both landline and cell phones. The margin of error for the Republican voters was plus or minus 4.5 percentage points. 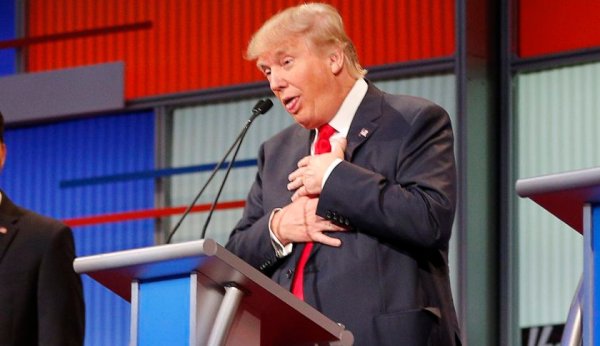 Check Out Donald Trump Endorsing Stuffed Pizza Crust in 1995
Next Up: Editor's Pick