Former Sri Lanka president Mahinda Rajapaksa’s bid to become the country’s next prime minister appeared to have failed as the results of this week’s parliamentary election continue to be counted Tuesday evening, with the ruling United National Party (UNP) leading by a one-seat margin with 18 out of 22 districts having been declared.

The UNP is unlikely to gain a full majority, however, and will have to form a coalition government with support from other parties, Reuters reported.

Rajapaksa appeared to have thrown in the towel early Tuesday, telling Agence France-Presse that he was conceding defeat a few hours before the official results were set to be declared, and saying he would continue to work as an opposition member of the South Asian island nation’s legislature, reported the French news wire.

“We have won eight districts and the UNP (ruling United National Party) has 11 (out of a total of 22),” Rajapaksa told AFP. “This means we have lost. It was a difficult fight.”

However, the 69-year-old politician soon backtracked through his official Twitter account, saying he was waiting for the official result. Rajapaksa did, however, tell Reuters that it was “unlikely” he would lead the government through the United People’s Freedom Alliance (UPFA) led by his Sri Lanka Freedom Party.

Political analysts and sources within the UNP say their party, represented by incumbent prime minister Ranil Wickremesinghe, will fall just short of the 113 out of 196 seats needed to secure a majority, but should be able to align with other political parties. The Sri Lankan legislature contains 225 seats, with the remaining 29 allocated by proportional representation.

Rajapaksa had been plotting a political comeback ever since he was dealt a shock defeat in the midterm presidential election he called earlier this year, losing to former ally Maithripala Sirisena to end to his decade-long tenure at the country’s helm.

Sirisena decided soon after to dissolve the parliament and hold fresh elections — the conduct of which on Monday was hailed as one of the most peaceful that the island nation has seen in recent years — with Rajapaksa eying a return to political power as Prime Minister even as an investigation into alleged corruption during his tenure as president as well as murder allegations against his son continue to swirl.

Sirisena, who as president has the power to appoint the prime minister from the winning party, had sent a sharp letter to Rajapaksa last week saying he would not allow him to take up the top post even if his party won. A possible return to political office by the former president has been treated with significant consternation by many Sri Lankans, with the head of the country’s central bank saying he would resign if the strongman was elected.

But that possibility is becoming increasingly unlikely as the results trickle in, and Rajapaksa, in all probability, has been dealt a second consecutive defeat.

“I invite all of you to join hands,” current prime minister Wickremesinghe said in a statement as the results continued to accumulate. “Let us together build a civilised society, build a consensual government and create a new country.” 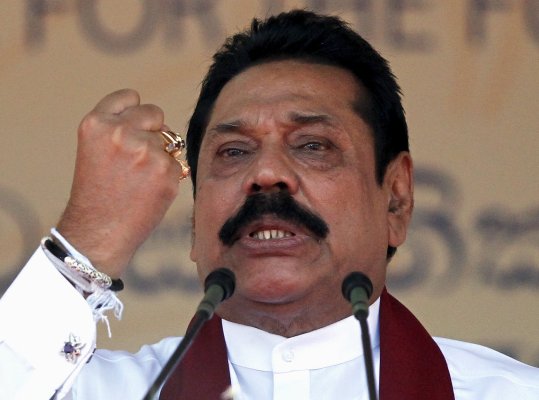 Five Things to Know About Sri Lanka's General Elections
Next Up: Editor's Pick