Looking to steady his presidential bid that seems to be stumbling, former Florida Gov. Jeb Bush is pitching an overhaul of how the country treats veterans as he campaigns Monday in South Carolina.

The Republican hopeful criticized Department of Veterans Affairs programs as antiquated and pledged to modernize the system, which serves more than 6 million Americans a year. In an op-ed piece in the National Review, Bush highlighted what he said were deficiencies in the system and promised to give veterans more choices for their care.

“The entire system needs to be simplified, reformed and refocussed on its most important mission—to ‘care for those who shall have borne the battle,'” Bush wrote.

Bush pointed to documents revealed last week that showed the VA denied more than 35,000 combat veterans care due to a computer glitch. “In this day and age, veterans should be able to login, make or cancel an appointment and check on the status of that appointment with little hassle,” Bush wrote in his proposal.

The presidential candidate’s plan would expand healthcare options through both the VA and outside caregivers. The existing system only allows those who cannot get an appointment within 30 days or those living 40 miles or more from a VA health facility to receive outside care.

Bush also criticized current VA practices and praised whistleblowers who have flagged as $5 billion in misspending. Under his plan, Bush offered greater protections for whistleblowers, including punishing managers who retaliate against them.

The GOP hopeful embarked on a two-day trip to South Carolina, which is slated to have the first primary in the South in February of 2017. Bush is looking to gain back some momentum, as he has fallen to fourth place among Republicans nationally, polling at just 9% as of Monday according to a poll from Fox News.

Veterans are a unifying bloc across party lines, and a must-carry constituency for Republicans. Bush’s pitch to veterans is a savvy political move to rally support as his campaign needs a boost.

Bush is scheduled to lead a town hall sponsored by Concerned Veterans for America on Monday night in Columbia, S.C, where he’ll discuss his plan face-to-face with veterans. 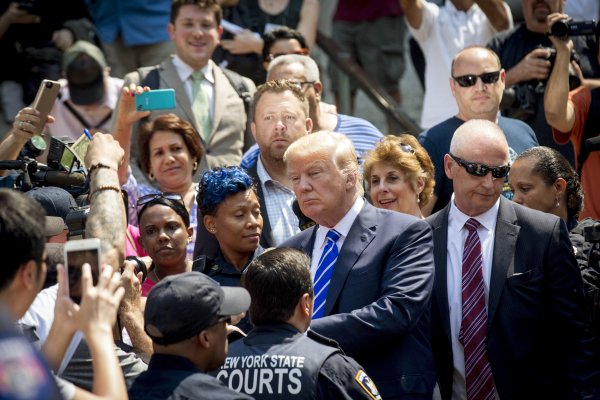 One Angry Man: Trump Reports for Jury Duty
Next Up: Editor's Pick