At Least 20 Dead in Bangkok Bombing

The Erawan Shrine, nestled between giant malls in downtown Bangkok, is normally a riot of incense, garlands, tourists and Buddhist worshipers who come to pray to a Hindu deity. On the evening of Aug. 17, at the height of rush hour, the shrine area was shaken by an explosion that killed at least 20 people and injured 140 more, according to police and local media, who reported that foreigners were among the fatalities. Police blamed the carnage on a bomb and said they had defused a second explosive device nearby.

Initial reports said the bomb, which exploded at about 7 p.m. local time (7 a.m. E.T.) had been hidden inside a motorcycle, though police later backtracked on that claim. The popular shrine was located at the Rajprasong intersection, the site of antigovernment demonstrations in recent years. Thai Defense Minister Prawit Wongsuwan said it was too early to ascribe political motives, but said the bomb had been intended to “damage tourism and the economy,” the BBC reports.

Bangkok has been hit by other small explosions in recent months, some of which were later blamed by the country’s military regime on antigovernment forces. In 2010, the streets near the Erawan Shrine were also bloodied when the army cracked down on antigovernment protesters, killing dozens.

For all its tourist appeal — the country markets itself as the Land of Smiles — Thailand is not a wholly peaceful place. In its Deep South, shadowy Muslim militants have waged a campaign of bombings, shootings and beheadings that have claimed thousands of lives over the past decade. Their deadly crusade has generally not strayed outside of the nation’s southernmost provinces, which were once part of a Malay Muslim sultanate before Thailand annexed them.

After the latest coup last year — the kingdom has endured more than a dozen successful ones over the past eight decades — Thailand is now ruled by a military junta that has little sympathy for Western-style democracy. The return to army rule under the National Council for Peace and Order (NCPO) comes after the nation’s electorate voted for years for populist parties aligned with exiled Prime Minister Thaksin Shinawatra. Ousted by the army in a 2006 putsch, Thaksin was convicted in absentia of abuse of power. His sister Yingluck Shinawatra later became Prime Minister but was forced to resign last year after the nation’s constitutional court found her guilty in another abuse-of-power case.

Thailand’s current Prime Minister is Prayuth Chan-ocha, a retired general who has ruled out polls this year and has warned journalists that he has the power to execute them should they write stories that anger him. Prayuth is backed by a handpicked parliament that has shown little concern for the desires of Thailand’s poor but populous northeast, which formed the backbone of Thaksin’s support. “One year since the military coup, Thailand is a political dictatorship with all power in the hands of one man,” said Brad Adams, Asia director of Human Rights Watch, in May, the one-year anniversary of the last coup. “The date for elections continues to slide, with no certainty when they will happen. Backsliding on respect for basic rights and democratic reform seems to have no end in sight.”

The nation’s monarch, 87-year-old King Bhumibol Adulyadej, is a unifying figure. But he is ailing. Criticism of the royal family can earn offenders lengthy jail terms for lèse majesté, and the number of such prosecutions has picked up in recent years. Hundreds of others, including political activists, have been tried by military courts for opposing the NCPO and its policies.

Thailand’s years of political instability have affected one of Southeast Asia’s biggest economies. Monday evening’s fatal bombing at a popular tourist site will also surely spook holidaymakers as they plan their next vacation. The Erawan Shrine is where some Thais go to pray for good fortune. The nation desperately needs it. 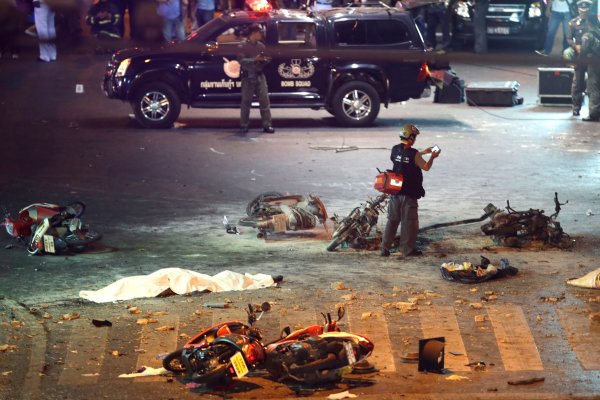