The use of drones—both recreationally and commercially—is on the rise, offering a boost to a booming drone industry expected to create billions of dollars worth of economic activity in the U.S. over the next decade. But significant uptick in close encounters between drones and manned aircraft—a quadrupling, in fact—is pushing many to call for increased regulation and better enforcement of the regulations that are in place.

One of the more prominent voices bringing attention to the heightened risk of a drone-on-aircraft collision is Capt. Chesley “Sully” Sullenberger. Sullenberger, most readers will recall, is the now-retired US Airways pilot that in 2009 managed to safely land his Airbus A320 passenger jet in the Hudson River, saving all 155 persons aboard.

On a recent appearance on Face the Nation, Sullenberger—now an aviation safety expert—told host John Dickerson in no uncertain terms just how bad a collision between a passenger aircraft and a drone could get. “We have seen what a six-pound or an eight- pound bird can do to bring down an airplane,” Sullenberger said. “Imagine what a device containing hard parts like batteries and motors can do that might weigh 25 or possibly up to 55 pounds to bring down an airplane. It is not a matter of if it will happen. It is a matter of when it will happen.”

Data on drone sightings by pilots released this week by the FAA would seem to support that assessment. In all of 2014 the FAA logged 238 drone sightings by manned aircraft. As of last week the FAA had tallied 650 drone sightings reported in 2015. That puts 2015 on pace to quadruple the number of drones spotted by pilots last year—an alarming trend given the potentially catastrophic consequences.

In a conversation with Fortune, Sullenberger emphasizes that he’s not making an alarmist prediction, nor does he want to see regulation stifle innovation in the emerging unmanned aircraft industry. What he does want to see is better risk management, better regulation of the recreational drone industry, and more enforcement of those regulations when drone operators do what he describes as “stupid, reckless, dangerous things.”

“It’s important to address this inherent tension between getting it fast and getting it right,” Sullenberger says. “How do we balance between undue delay and forcing people who fly to accept risk that they really shouldn’t have to accept? We do need to have a way for people to address business opportunities. We do need a way for people to use emerging technologies. But it should not be and need not be at the expense of having people who fly accept a level or risk that they should not have to accept. It is much more important to get it right than to get it fast.”

The ongoing debate over how exactly how to strike a balance between public safety and freedom to innovate escalated in June when Sen. Dianne Feinstein (D-Calif.) put forth a piece of draft legislation known as the Consumer Drone Safety Act. The proposed legislation would dictate when, where, and how recreational drones could be operated and require makers of drones to pre-install certain tamper-proof safety failsafes on recreational drones. “If we don’t act now, it’s only a matter of time before we have a tragedy on our hands,” Senator Feinstein said in a statement, echoing a growing refrain among advocates of increased drone regulation.

Some in the drone industry called the act legislative overkill, arguing that innovation in the industry comes from the kind of freedom to tinker that the Consumer Drone Safety Act would restrict. But Sullenberger says he supports the kinds of measures outlined in the proposed bill. “The version I saw when it was introduced, I support,” he says of the bill. “I think it goes a long way toward codifying certain requirements that could mitigate at least the risks that are known, the ones that we’ve identified. It goes a long way toward protecting the traveling public from the downside of this new technology as it’s being used currently.”

Currently, the technology is mostly being used recreationally in the United States. The FAA only recently handed out its 1,000th permit for commercial drone operation. Meanwhile, the Consumer Electronics Association estimates that 700,000 hobbyists will purchase drones this year, up 63% from 2014. These recreational users are largely unregulated and difficult to identify and prosecute when they do break the limited regulations that exist. That makes for an environment in which dangerous behavior can flourish, Sullenberger says.

In response to the uptick in drone sightings, two leading drone groups—the Association for Unmanned Vehicle Systems International and the Academy of Model Aeronautics—issued statements last week urging the FAA to step up enforcement of recreational drone rules. They also urged the agency to quickly finalize a set of small unmanned aircraft systems regulations that have been in the works for years.

The finalizing of those rules—which would largely apply to commercial drone operators—will likely bring even more drones into the sky, but Sullenberger says he worries somewhat less about commercial operators. “In many cases you have licensed pilots who have the knowledge—they understand airspace requirements and the rules of flying,” he says. “I think that’s much less of a concern than the recreational side.”

Even so, he says, if we’re truly going to integrate drones—both commercial and recreational—into the national airspace alongside manned aircraft, even small drones are going to have to meet some of the same requirements as manned aircraft. Those include a means to electronically identify themselves to air traffic controllers and other aircraft and some way to see and avoid other objects in the sky. That’s going to require some leaps forward in technology and it’s going to take some time.

“Making safety a core business function is really what we’re working toward in aviation, and it’s an approach that’s paid dividends,” he says. “That’s the approach we must take with this issue as well. We have a responsibility to do this right.” 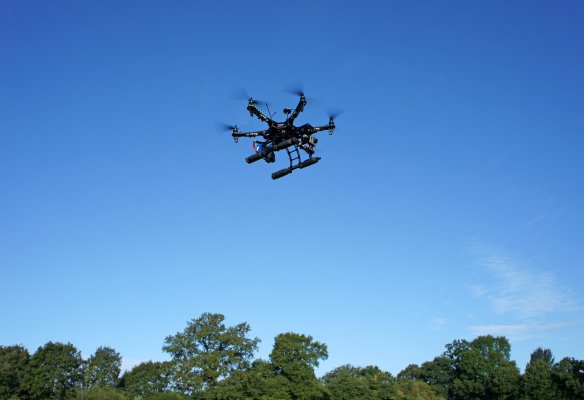 Kentucky Man Arrested for Shooting Down a Drone Over His Property
Next Up: Editor's Pick