Disney is putting its own spin on a beloved fairytale. The company announced Friday at the D23 Expo that it will transform the Jack and the Beanstalk story into an animated film called Gigantic. Tangled director Nathan Greno will helm the project.

In this version of the story, Jack hails from 15th-century Spain, “the age of discovery,” Greno told the D23 audience, according to Entertainment Weekly. Jack will discover not just one castle and one giant but a whole new world, beginning with a 60-ft.-tall 11-year-old girl named Inma.

“She gets her hands on a grown man Jack, and she thinks he’s a toy,” said Greno, who added that the character was inspired by a young girl they met while scouting locations in Spain. Inma even gets her own song, which the award-winning Frozen duo, Robert Lopez and Kristen Anderson-Lopez, previewed at the event. The Lopezes will score the entire film.

Following the success of Frozen’s independent princesses, Disney has invested in creating a more diverse range of female characters, including the new character Inma. The studio also plans to bring another feisty princess to the big screen in Moana. The 16-year-old Moana, living in the South Pacific nearly 2,000 years ago, sets out on a dangerous sea voyage with her pet piglet Pua as a stowaway. 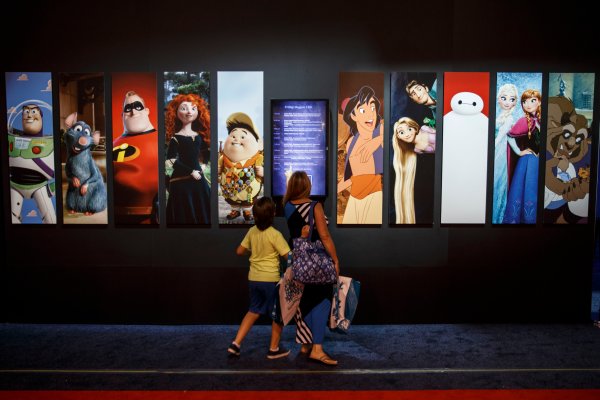 Here Are the New Posters of Toy Story 4, The Incredibles 2 and Other Pixar Movies
Next Up: Editor's Pick