New York City Police Commissioner William Bratton speaks on the 'On Policing in New York - And What Made This Year Different' Panel at the 2015 New York Ideas Forum in New York City on May 20, 2015.
J. Countess/Getty Images
Ideas
By Joe Domanick
Joe Domanick is the West Coast Bureau Chief for the Crimereport.org, the Associate Director of The Center on Media, Crime and Justice at John Jay College of Criminal Justice, and the author of BLUE: The LAPD and the Battle to Redeem American Policing. Bratton was a source for the book.

If Bill Bratton were to depart as Commissioner of the New York Police Department—as he hinted at this summer, then walked back—he would be ending an illustrious and controversial career as the most prominent American police reformer of the last quarter century. His leadership touches on valuable questions. How can American police chiefs win back the public’s trust, after the police shootings and violence of places like Ferguson, Mo., and New York City? And what lessons can police learn from his storied career?

It was Bratton’s spectacular success in dramatically lowering New York’s crime rate and transforming the dysfunctional cultures of the New York City Transit Police then NYPD in the early and middle ‘90s that brought him into the national spotlight. Since then, Bratton started the reformation of the LAPD and then the NYPD for a second time, in 2014.

That’s why it’s important—as the public questions police shootings and use of force, challenges the militarization of departments and requests use of dashboard and body cameras—to study Bratton’s career.

Lesson 1: When your cops are guilty, be transparent. Don’t own a bad story; take remedial action.

On May 1, 2006, more than 6,000 protestors peacefully assembled in a park near downtown Los Angeles. Suddenly, a few bottles and cans were thrown from the crowd. The LAPD’s mobile, often brutal Metro Division then plunged into the crowd. Clad in riot helmets and full military gear, the officers, wielding two-foot-long batons or surreal-looking rifles, fired off 240 rubber bullets into a crowd that included women wheeling baby strollers a dozen or more reporters. Their actions were met with an immediate roar of outrage.

Traditionally after such events, police chiefs close ranks, back the troops and restrict access to information. Bratton did the opposite. “This old policy that you need to ‘protect the department’ and sweep things under the rug—well, I grew up when it was all about [that attitude]. But I’ve never been part of that school.”

Engaging the furor head on, he described the incident as the worst he’d ever seen; met with critics, civil libertarians and reporters; demoted one commander and forced another into retirement; released a report highly critical of the event; and ordered the retraining of the entire Metro Division. Soon he was unanimously rehired by the Los Angeles Police Commission to a second five-year term as chief.

Lesson 2: Be prepared to change outdated or wrong-headed policy—even if you’ve introduced it.

As part of reducing crime in New York in the mid-90s, Bratton introduced the massive use of stop-and-frisk. It can be argued that tactic was needed to quickly change the high-crime, chaotic situation in New York. But it had to be used selectively, Bratton said. That didn’t happen.

By 2014, when Bratton returned to again lead the NYPD, New York was no longer the high-crime, out-of-control city of the early ‘90s. Nevertheless, the NYPD’s stop-and-frisk practices had grown so intense, heavy-handed and racially divisive that in 2011 New Yorkers stopped and frisked an astounding 685,000 people. In 2014, Bratton would reduce that number by almost 80% while crime declined. Forced to consider the consequences of a police a tactic he had initiated, Bratton was willing to pivot, and he did, removing a major irritant of police relations.

But Gannon believed the doubters had missed the point. Bratton thought each community different, and that community policing had to be developed by field captains to fit their specific divisions and neighborhoods—and, “as crime declined, community trust and confidence would grow, along with [grassroots] relationships and partnerships,” Gannon said. That’s what community policing is, and that’s exactly what happened in Los Angeles.

Lesson 4: For police chiefs: Grab the levers of power, show who’s in charge and demand that your command staff impress you, not the other way around.

A few days after Bratton became LAPD Chief in 2002, he announced a meeting of the LAPD’s entire command staff, told them what was wrong with the department, and the way it would be now.

He demanded that command staff submit a resume, a photo, and answer questions about their current positions. He wanted a “face with a biography in a book” that he could turn to when hearing about “who was good and who was bad.”

What he was telling them was that they now had to justify their existence and apply for their own job again. Soon he issued demotions and forced retirements, and promoted officers who’d impressed him over candidates next in line for a position. “Hey, we understand force in the LAPD,” said future LAPD Chief Charlie Beck. “He demonstrated his authority–which in the LAPD we understand: that if you want to keep the crows away, you kill one and leave it on the fence.”

Bratton’s great achievement was lowering crime by changing the way police functioned from just responding to crimes after they happened, to preventing crimes before they occurred. But in the process he also introduced several of the biggest problems we face in policing today. He was the first wave of modern American police reform. The second—with the deaths of Michel Brown in Ferguson and Eric Garner in New York—has already started.

Joe Domanick is the West Coast Bureau Chief for the Crimereport.org, the Associate Director of The Center on Media, Crime and Justice at John Jay College of Criminal Justice, and the author of BLUE: The LAPD and the Battle to Redeem American Policing. Bratton was a source for the book. 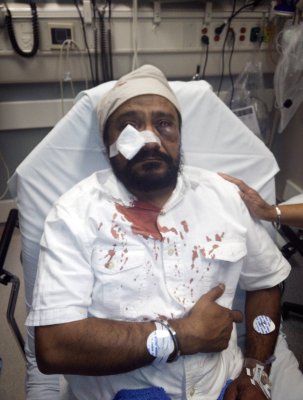 What Does It Take To Call Something a Hate Crime?
Next Up: Editor's Pick