Born into a family of Quakers, David Kendall had a birthright claim to be a conscientious objector when the draft was instituted during the Vietnam War. But while he opposed the war, he couldn’t in good faith claim to be a pacifist, those who know him say. So as a student at Yale Law School at the time, he did two things instead: he dove into researching how the draft lottery worked, eventually co-writing a book on the subject, and he enlisted in ROTC, taking a commission as 2nd Lieutenant.

Kendall didn’t end up deploying overseas, but his experience with the draft is as good a place as any to begin understanding the man Hillary Clinton has turned to once again for legal help, this time defending her use of personal email as Secretary of State. Liberal, intellectual and relentlessly committed to the fight, the affable Kendall, who has known the Clintons since their time together at Yale and who defended Bill Clinton during his impeachment, is once again preparing to go to war, whether he has to or not.

Increasingly, it looks as if he will. This week, the Intelligence Community Inspector General told Congress that two of the emails that were stored on Clinton’s unclassified, private email server contain information that should have been classified at the highest level, Top Secret, because they were derived in part from secret overhead eavesdropping platforms like satellites or drones. The IG says there are hundreds of other emails containing classified information in the stash of 55,000 the State department is reviewing from Clinton’s server. Most threatening of all, the hard-headed investigators at the FBI are conducting an inquiry into how classified information made it into unclassified settings. This week, the FBI took possession of both Clinton’s server and thumb drives containing copies of the emails that Kendall had been holding for safekeeping.

For Clinton, the prohibitive favorite for the Democratic presidential nomination in 2016, the developments are a thicket of political, bureaucratic and legal challenges that threaten to stall her campaign and further damage her trust with voters. For Kendall, the challenge is to deliver his expertise in a context where legal fallout is only half the battle.

In one sense, Clinton and Kendall are well matched. Both excelled at law school and they sought out each others’ advice early in their careers. Kendall called her when he needed a contact in Arkansas, where she worked as a young attorney while Bill Clinton pursued politics. And she called Kendall when she needed advice from D.C., where he had joined Washington’s premier litigation firm, Williams and Connolly, after clerking for Supreme Court Justice Byron White and specializing in death penalty appeals at the NAACP Legal Defense Fund in New York.

It was when the Clintons arrived in Washington with the baggage of the Whitewater investigation that they really reconnected with Kendall, however, hiring him to defend them against accusations of improper business dealings. And when Clinton found himself needing to prepare for grand jury testimony in the Monica Lewinsky investigation four years later, it was Kendall who prepared him. “His job was to make sure there was never a criminal charge against the president,” says one member of Bill Clinton’s legal team, and “his preparation [of Clinton for the grand jury testimony] will go down as one of the best ever.”

Legally that is certainly true, but Clinton is dogged to this day by the aura of deceit that settled around his narrow, evasive, answers about his relationship with Lewinsky. “When you’re asked a question in a deposition,” Kendall said later as he defended the president’s narrow testimony in the Lewinsky case, “You ought to respond specifically to the question. You ought not, if asked your name, to give your name and address.” That discipline and control delivered Bill Clinton from the danger of a criminal charge and helped earned Kendall the highest praise from allies and opponents alike in the world of Washington litigation.

But the challenge Kendall faces in representing Hillary Clinton is that the context of her email scandal is not just legal. Her goal of becoming president, and indeed the hopes of the Democratic party for retaining the White House, are piggybacking on her defense in the email case. When it comes to matters unrelated to the law, Kendall is less well-versed. “His lack of being involved in the political process,” says the former member of Bill Clinton’s legal team, and the fact that “he’s never been in government,” are both challenges to his ability to advise Clinton.

On the legal issues relating to the handling of classified information, Kendall has recent experience. Kendall represented David Petraeus, the former CIA chief, who pleaded guilty in April to a misdemeanor charge of mishandling classified materials and was fined $100,000. The case resulted from Petraeus improperly sharing classified information with his biographer, Paula Broadwell. Kendall led the negotiations that produced the plea deal, which angered FBI agents who thought Petraeus had misled their investigation into the matter.

Hillary Clinton so far appears not to be in the same kind of trouble Petraeus got himself into. But the news that two of Clinton’s emails may contain Top Secret information makes Kendall’s legal defense more complicated. The presence of classified emails does not in itself mean Hillary Clinton broke the law, or even President Obama’s rules regarding the proper protection of classified materials. Generally speaking under the laws criminalizing misuse of classified information, one is guilty only if one “knowingly” removed and intentionally retained secrets improperly. None of the emails contains markings indicating they contained secret information, the Inspector General and other officials have repeatedly said.

But communications intercepted via satellite or other overhead collection means are so closely protected that they have their own law 18USC798, with even tighter rules and higher penalties. That law makes it a crime not just to knowingly mishandle such secrets, but also to use them “in any manner prejudicial to the safety or interest of the United States.” That in turn, says a senior intelligence official familiar with the case, means the FBI’s investigation into the handling of the classified materials “will go way beyond what the intelligence community’s Inspector General ever would do.”

Kendall declined to be interviewed for this article and the Clinton campaign did not return email messages asking for comment for it. The campaign has said her use of a private server and the discovery of classified information on it are being amplified by the political agendas of Republicans on Capitol Hill and on the 2016 presidential campaign trail.

That is no doubt true but it doesn’t make the job of defending her position any easier. Kendall will have his hands full as he attempts to juggle the legal interests of his client and the political reality she has to operate in. “He’s an incredible lawyer, he writes brilliantly, and he works harder than anyone else,” says Kendall’s old colleague from the Bill Clinton impeachment. “Whether he’s successful in the rough and tumble of the public arena is another question.” 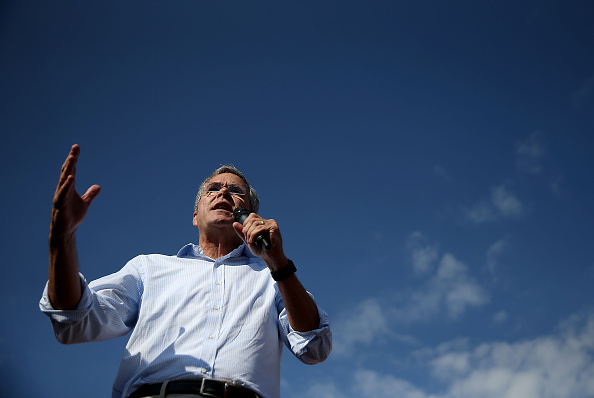 Jeb Bush Is Not the Only 2016 Candidate Open to Torture
Next Up: Editor's Pick