Jimmy Carter Paved the Way for U.S. and Cuba Relations

Thirty-eight years ago, Jimmy Carter and Fidel Castro agreed to open downgraded embassies called Interest Sections in Havana and Washington, D.C. Carter’s intent was to normalize relations between the two countries during his tenure.

Those intentions were derailed by Cuba’s adventures in Africa, the Mariel Boatlift refugee crisis and the election of Ronald Reagan.

And now – five U.S. and two Cuban presidents later – the Interest Sections are again embassies. U.S. Secretary of State John Kerry will travel to Cuba on August 14 to raise the American flag over the embassy in Havana.

It took six years in office before Obama had the political capital to spend on changing Cuba policy.

At the beginning of Obama’s administration, Cuban-Americans opposed to an opening controlled key positions in Congress. That group included Representative Ileana Ros-Lehtinen, R-Fla., then chairwoman of the House Foreign Affairs Committee, and Senator Robert Menendez, D-N.J., former chair of the Senate Foreign Relations Committee and the Democratic Senatorial Campaign Committee. Obama waited until after the last election of his tenure – the 2014 midterm vote – to announce the results of his secret negotiations with the Cuban regime.

In Cuba, Raul Castro initiated difficult economic reforms in 2011 to wean half a million citizens from the state’s payroll and allow small businesses to begin the transition from a state-owned economy to a partially market-led one. He waited to get those reforms well under way before beginning to deal with the ambiguous politics of the United States. Still, Castro was pressed by the need to lift the financial strangulation imposed not only by the trade embargo but also the additional U.S. financial restrictions on foreign banks dealing with Cuba.

By the time of the announcement in December 2014, public opinion in the U.S. – even among Cuban-Americans – favored normalization and lifting the embargo.

Work Carter did decades ago helped change that public opinion.

In 1977, Carter’s policy changes were quite dramatic: he removed all travel restrictions on Americans to travel to Cuba and took the first big steps toward normalization while still in the midst of the Cold War.

In 2002 – well after leaving office in 1981 – Carter traveled to Cuba at the invitation of Fidel Castro, the first U.S. president to do so after the 1959 Cuban Revolution. Carter sought to improve understanding between the two peoples and the two governments.

Carter made a speech in Spanish, broadcast live to the entire island, in which he called on the US as the more powerful country to take the first step and lift the embargo. He also called on the Cuban government to respect its own constitution by protecting free speech and assembly, and allowing the citizens to petition for a change in the laws.

He introduced the Cuban people to the Varela Project, an effort led by human rights activist Osvaldo Paya to collect signatures to trigger a referendum for legislative reform. The state-controlled media had ensured that most Cuban people had never heard of the project prior to the speech.

I accompanied Carter on that trip, as then-director of The Carter Center’s Americas Program, and I negotiated the terms for delivery of that speech with the Cuban authorities. I watched as Fidel Castro and his cabinet sat stony-faced on the front row of the University of Havana’s grand salon. Afterward, I feared a berating from Castro, but Castro only came up and said to Carter, “Let’s go watch the baseball game.”

Castro asked Carter for one favor – to walk out to the pitcher’s mound to throw out the first pitch without his security detail, to demonstrate Carter’s confidence in the Cuban people. Carter did so.

Carter and I traveled again to Cuba in 2011, this time to meet President Raul Castro. Relations were stymied by the imprisonment of American citizen Alan Gross in Cuba and the competing priorities of both presidents.

Osvaldo Paya died tragically in a car accident in 2012. His petition campaign had been twice delivered to the National Assembly with more than the required 10,000 signatures, but not accepted.

Cubans are slowly gaining rights to improved communication and internet, but implementation remains slow. Competing political parties are still not allowed. The U.S. trade embargo is still in place until the U.S. Congress decides to lift it.

Nevertheless, leaders in both countries are paving the way to test Jimmy Carter’s persistent belief that the best way to improve the lives of all Cubans and to overcome differences with any government is through engagement.

The tide is rapidly turning in favor of closer relations between both countries. The excitement was palpable at the opening of the Cuban embassy in D.C. a month ago.

The holdouts in Congress – still blocking U.S. companies who want to trade with Cuba and American citizens who want to travel freely – will be forced to give in sooner, rather than later.

When that happens, we should give some of the credit to Jimmy Carter. 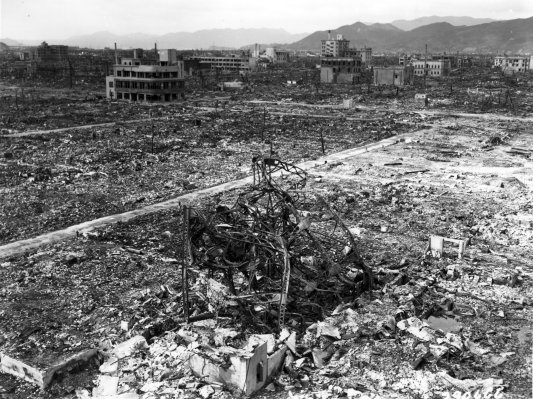 What We Need To Do To Prepare for Another Nuclear Event
Next Up: Editor's Pick