The American government finally has its own tech army—and it’s looking to recruit.

President Obama signed an executive order on Monday to officialize the Presidential Innovation Fellows (PIFs) program, a growing national service initiative that recruits technologically-minded Americans as troops to work alongside federal employees to create products and services for a dozen government agencies.

The executive order, which formally establishes the three-year-old fellowship within the General Services Administration, is the culmination of Obama’s efforts to improve upon the federal government’s outdated IT and web services. So far, the roughly 100 fellows who’ve participated in the competitive service program have tackled issues like the Healthcare.gov meltdown, the Veterans Affairs scandal and police reform.

“Almost every job or career comes to the government, except technology. And when they do come, they’re buried in the IT team,” says U.S. Chief Technology Officer (CTO) Megan Smith, who left her job as a Google exec last fall to spearhead the nation’s technology policy.

Smith, the third person and first woman to hold the post, said the idea of tech service “hadn’t occurred to [her]” until she began emailing with former U.S. CTO Todd Park, the fellowship’s founder. “The tech folks haven’t always had a welcome seat at the table,” says Smith, who, like Park, maintains that the federal government can be as good an incubator for innovation as Silicon Valley—with the right people. The program does its own recruiting, but also has an application available on its website.

“In Silicon Valley, you accomplish a lot and move the bar from a technical perspective,” adds Smith. “But it’s important to show up where your skills are rare, and it’s in that cross-functionality that you move the bar in a whole other way.”

That’s largely the reason why the program’s fellows choose to serve their tech “tours of duty,” according to fellows Clarence Wardell and Denice Ross. The two had begun their fellowships last September initially working in data innovation projects for the Department of Energy, but soon began working with the President’s Task Force on 21st Century Policing in the wake of Ferguson. Wardell and Ross have since collaborated with police departments around the country to open up datasets around police-citizen interactions.

“Denice and I continued, I’d say, a short but high-profile tradition of [fellows] being able to scrub in on projects that become immediate in nature during our tenure here,” says Wardell, who left his job at a D.C.-based think tank after learning about the program through Twitter.

Read next: Inside the Tech Revolution That’s Turning Rwanda Around

Ross, who previously worked on open data initiatives at a New Orleans nonprofit, also praises diversity as one of the program’s chief merits. About half of the fellows are women or minorities underrepresented in the tech field — not to mention their varied backgrounds, skills and geographic locations. “We like to say the program is solving problems that affect all of us. Therefore, the teams that we attract need to represent the same group of people that our government serves,” says Garren Givens, director of the Presidential Innovation Fellows program.

As the program moves forward, Smith and her colleagues continue to be surprised by the number of fellows—about one-third—who choose to stay after their 12-month stints.

“When the program started, I didn’t think anyone thought they would stay,” says deputy CTO Ryan Panchadsaram, who was in the inaugural class of fellows. “But we’re seeing how much impact they can have. They’re kind of our missing partner in our venture—policy and technology go so hand in hand.” 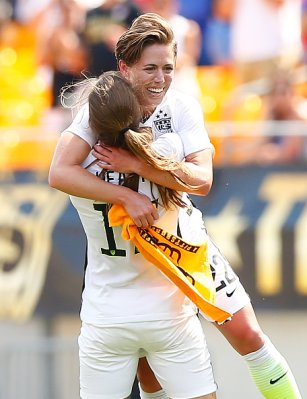 Women's Soccer Is a Feminist Issue
Next Up: Editor's Pick