Nearly a dozen presidential candidates are in Iowa this weekend to take in the annual State Fair less than six months before the first-in-the-nation caucuses. Jeb Bush will kick off the day Friday at the Des Moines Register “Soapbox” and Donald Trump will arrive at the fair by helicopter Saturday afternoon. On the Democratic side, Hillary Clinton, Bernie Sanders, Martin O’Malley and Lincoln Chaffee will attend the Iowa Wing Ding at the historic Surf Ballroom in Clear Lake, the site of Buddy Holly’s final show. Clinton and Trump are scheduled to be at the fair at the same time on Saturday, and an interaction may just break the Internet.

Secretary of State John Kerry will attend the flag-raising at the U.S. Embassy in Havana Friday — the first time the flag has flown there since President Dwight Eisenhower broke off diplomatic relations more than a half-century ago. Sesame Street will be funded by HBO in a belated victory for Mitt Romney. Al Gore isn’t running for president. And what we learned in the week after the first GOP debate.

What We’ve Learned Since the Republican Debates

With TIME’s Philip Elliott, a look at a wild week in politics, and some clues for the next six months

Iraq War Ends for This General, But Not For His Army

Marines Who Removed Flag at U.S. Embassy in Havana Will See It Raised

Despite a report, the former VP is not looking to run again [The Tennessean]

“I don’t want to make a definitive, blanket kind of statement.” —Former Florida Gov. Jeb Bush in Iowa Thursday declining to rule out the use of waterboarding, an interrogation tactic which President Barack Obama calls ‘torture,’ in a future administration.

“I will make this pledge here and now: As president, as a symbol of solidarity between my administration and those who strive for freedom around the world, I will invite Cuban dissidents, Iranian dissidents, Chinese dissidents, and freedom fighters from around the world to be honored guests at my inauguration.” —Sen Marco Rubio will say Friday morning in remarks at the Foreign Policy Initiative in New York City.

“I’m sorry Jim, I’m gonna stop the subsidy to PBS. I like PBS. I love Big Bird. I actually like you, too. But I’m not gonna keep on spending money on things to borrow money from China to pay for it.” —Mitt Romney in the first presidential debate of 2012.

Here’s What President Obama Is Reading This Summer [TIME]

Ben Carson Once Did Research On Fetal Brain Tissue [BuzzFeed] 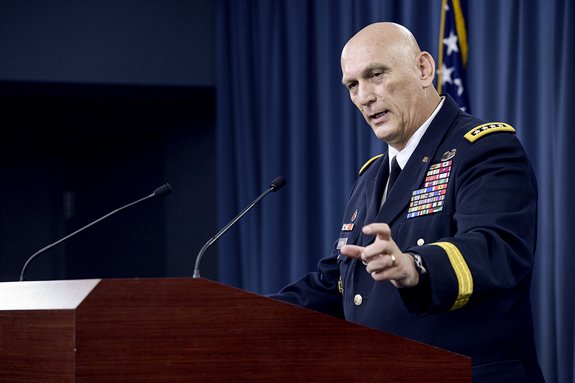 Iraq War Ends for This General, But Not For His Army
Next Up: Editor's Pick