Sri Lanka's former president Mahinda Rajapaksa, who is contesting in the upcoming general election, speaks during the launch ceremony of his manifesto, in Colombo July 28, 2015
Dinuka Liyanawatte—Reuters
By Nikhil Kumar and Amantha Perera / Colombo

On Aug. 17, seven months after Maithripala Sirisena pulled off a stunning electoral victory over Mahinda Rajapaksa to become Sri Lanka’s President, the island nation will go to the polls to choose a new Parliament. The contest will help determine the future of Sirisena’s drive to reform Sri Lanka after nearly a decade of increasingly autocratic rule under Rajapaksa, who is seeking a comeback to the political frontline. Here are five things to know as campaigning ends and Sri Lankans prepare to cast their ballots.

1. Until November, Rajapaksa seemed all but certain to charge to a third term as President

January’s result surprised not only Rajapaksa, who only months before seemed secure in his position at the top of Sri Lankan politics, but also his successor. A former Rajapaksa ally, Sirisena only defected from the ex-President’s side in November. “For a short period after being elected, I was not really certain that I am the President,” Sirisena told TIME in a rare interview in April. “Similarly, the Rajapaksa family … must be thinking, ‘What happened here?’”

First elected in 2005, Rajapaksa won a second term in 2010, cashing in on widespread support among the country’s Sinhalese Buddhist majority months after leading the Sri Lankan army to victory over separatists from the country’s Tamil minority to end a decades-long civil war. The U.N. estimates that as many as 40,000 Tamil civilians may have died in blood-soaked final weeks of the conflict. With his popularity soaring in the majority community, Rajapaksa embarked on a project to beef up the country’s already powerful executive presidency. Meanwhile, members of his extended family popped up in official posts around the Sri Lankan state, despite allegations of widespread corruption. Civil society activists and dissidents complained of intimidation and spoke of a climate of fear. Against this troubling backdrop, and with no viable opposition figure in sight, Rajapaksa appeared to be heading for another victory when he called early presidential elections in January.

Then out of nowhere came Sirisena, who promised to dismantle executive presidency and devolve power to Parliament. The country’s Tamil and other minorities that had been sidelined under Rajapaksa backed him, as did a significant section of the Sinhala Buddhist majority that had grown tired of Rajapaksa’s strongman ways. Holding out the hope of a move toward national reconciliation, he also vowed to setup an independent domestic enquiry into war-time rights abuses.

2. Since taking office, Sirisena been constrained by a divided Parliament

Although January’s election gave him the keys to the presidency, Sirisena has been hamstrung by a lack of support in Parliament, with many members of his Sri Lanka Freedom Party (SLFP) remaining loyal to their former leader, Rajapaksa. Teaming up with Ranil Wickremesinghe, the leader of the much smaller United National Party, to form a coalition government, Sirisena promised to implement an ambitious 100-day program when he took office, covering, among other issues, the devolution of power from the presidency, an overhaul of the electoral system and a new right to information (RTI) law. He told TIME that he would also announce the domestic enquiry into war-time rights abuses by the end of June. But his 100-day agenda remains incomplete. He has succeeded in imposing some checks on the presidency, but electoral reform and the proposed RTI bill had to be shelved. Meanwhile, the government is yet to announce the details of the domestic probe.

As Sirisena struggled to implement his agenda, Rajapaksa returned to his home in southern Sri Lanka to plot a comeback, meeting supporters and visiting Buddhist temples while his allies in Colombo resisted the new government’s attempts to reform with protests and no-confidence motions in Parliament.

In early July, soon after Sirisena set the ball rolling for the Aug. 17 election by dissolving the legislature, Rajapaksa announced that he would contest a seat under the banner of the United People’s Freedom Alliance (UPFA), a coalition of parties led by the SLFP. His aim is to become Prime Minister.

Throughout his campaign, he repeatedly denied allegations of corruption against his family and invoked the military victory over the Tamil separatists that won him re-election in 2005, portraying himself as a force for stability. “This is an election that will decide the entire future of our country both in economic and political terms. The 2005 presidential election was a turning point in our history,” he told the Island, a local newspaper, on Aug. 11. “If we had not won that election the whole history of this nation would have been different.” In a bid to fan nationalist sentiments in the majority community, he added: “Today, we don’t have a stable government, national finances are in a major crisis and separatist forces are once again destabilizing the country.”

The prospect of Rajapaksa’s return to the political fray is an unsettling one for many — particularly activists and dissidents who had faced intimidation or arrest during his time in power. “It is a really scary thought,” said human rights activist Ruki Fernando, who was detained under the Rajapaksa regime while investigating the arrest of a Tamil campaigner against political disappearances. “There are incidents of intimidation, of police preventing protests and arrests, but the intensity of such actions and the numbers have reduced [since Sirisena came to power].”

4. But the revival of a murder probe has turned up the heat on Rajapaksa’s campaign

On Aug. 10, police in Sri Lanka exhumed the remains of former national rugby player Wasim Thajudeen, whose charred body was recovered from his burned-out car in May 2012. Initially reported to have died in a car crash, a Sirisena government spokesman claimed recently that Thajudeen had been tortured and murdered by members of Rajapaksa’s presidential security guard.

The case was reopened this year amid allegations that the rugby player’s death might be linked to a dispute between him and one of Rajapaksa’s sons — a claim that the former President denies. “First, they tried to portray us as thieves and when they have no proof of corruption to produce after seven months of investigations, they are now trying to say that we murdered people,” he told the Island. “This is why bodies are being exhumed in the middle of an election.”

But the case could be “potentially very explosive,” Paikiasothy Sarvanamuttu, a Sri Lankan political analyst and director of the Colombo-based Centre for Policy Alternatives (CPA), told Reuters. “It might go right to the top.”

As election day nears, Sirisena’s staff is preparing for a hung Parliament, according to an official who spoke to TIME. Minority votes are likely to go in favor of Sirisena’s supporters, while one recent CPA opinion poll showed that although Rajapaksa retained the backing of many Sinhalese Buddhists, with 36% favoring him as the next Prime Minister, a significant section of the majority community also supported his chief rival and Sirisena’s ally, Ranil Wickremesinghe, who was backed by nearly 32%, according to the Wall Street Journal.

Meanwhile, although he failed to stop Rajapaksa from securing a UPFA nomination, Sirisena has sharpened his attacks on his former boss in recent days, issuing a letter saying that he would not appoint him as Prime Minister even if the UPFA coalition wins a majority. “There are eminently suitable seniors in the party from whom I can pick a Prime Minister,” he wrote, according to excerpts translated into English by the Press Trust of India news agency. “Not only you [sic] held two terms you deprived the party seniors opportunities by trying to stay on forever.”

Whether Sirisena could carry out this threat likely depends on the level of support his rival receives. And campaign posturing aside, whether or not the Rajapaksa is able to fulfill his ambition for a comeback will ultimately hinge on the verdict of the same constituency that sent him packing in January — the Sri Lankan people. 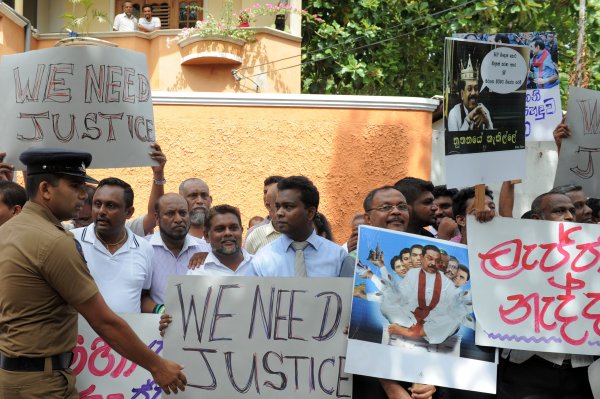