A Pakistani army soldier stands guard at the site of the militants' attack on the army-run school in Peshawar on December 18, 2014.
A MAJEED—AFP/Getty Images
By Rishi Iyengar

Six Taliban militants linked to last year’s attack on a school in Pakistan’s northern city of Peshawar were sentenced to death on Thursday, for their role in the December 2014 massacre that claimed the lives of more than 140 people, most of them children.

The accused were tried in military courts, where the army said they “were given a fair trial”, the BBC reported. A seventh militant was sentenced to life imprisonment.

The attack on Peshawar’s Army Public School, where a majority of the victims were under the age of 16, prompted a wave of anger across the country against the Taliban and resulted in Pakistan lifting a seven-year moratorium on executions.

These are the first death sentences to be handed down for the horrific attack, according to the BBC. None of the six sentenced to death this week were among the attackers, all of whom were killed by Pakistani security forces during the attack itself.

Read next: The Fear That Haunts Peshawar 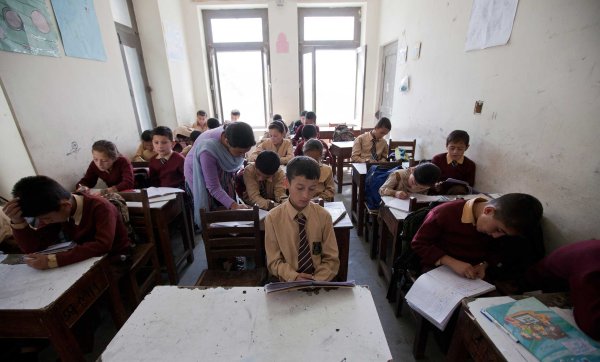 Why Pakistan Is Replacing English With Urdu
Next Up: Editor's Pick