A Brief History of the Tea Bag

A selection of Lipton tea bags over the years, from 1920 to 1951
Unilever
By Sarah Begley

A way to get a self-contained, no-muss jolt of caffeine may seem like a quintessentially 21st-century need—but the original single-serving, low-cleanup caffeine delivery method actually hit the market more than 100 years ago ago.

There’s some debate about who invented the very first tea bag. One of the most popular legends has it that American tea importer Thomas Sullivan shipped out samples of his product in silk pouches in 1908, not intending his customers put them directly in the hot water that way, but some tried it and asked for more of the same.

Seven years earlier, though, Roberta C. Lawson and Mary Molaren of Milwaukee filed for a patent for a “tea leaf holder” that also resembles what we use today. “By this means,” they wrote, “only so much of tea-leaves is used as is required for the single cup of tea,” making less waste. As they detailed in their application, the bag needed to hold the tea leaves together so that they didn’t float into the drinker’s mouth, but not so tightly that the water could not circulate through them to be infused. Their design used a stitched mesh fabric; Sullivan, too, would later switch from silk to gauze after he saw that the weave of silk was too fine for optimal infusing.

No matter who got to it first, the invention solved two problems at once: how to make single serving tea-brewing more convenient, and how to reduce cleanup—throwing out a teabag is much easier than cleaning loose leaves out of a pot.

Tea manufacturer Lipton, which is the world’s biggest tea company, celebrated its 125th anniversary this summer. Though Thomas Lipton’s initial venture wasn’t the first to use bags for individual servings of tea, the company does claim credit for the idea of printing brewing instructions on the tags, as seen in the photo above. And, while the brand has made a few tweaks over the years, its basic tea bag has remained the same for six decades. Even the contents have hardly changed: “The amount of black tea that Lipton uses in a teabag has stayed the same since the ‘flo-thru’ bag was introduced in 1952,” explains John Cheetham, Lipton Tea Master. (That’s about 30 leaves per bag.)

Some have tried to revolutionize tea-steeping; Keurig, for instance, has even manufactured tea pods for its K-Cup machines, taking the wait time out of steeping. Others have tried to de-evolutionize tea steeping; there are loose-leaf purists just as there are pour-over coffee enthusiasts. But the teabag is so brilliant, it really does not need improvement; from Bigelow to Twinings, the little mesh bag stapled to a string works every time. As John Harney of Harney & Sons once said, all a teabag needs to be lifted to perfection is “furiously boiling water” and five minutes’ steeping—“no more, no less.”

The simple teabag has required no modification since its invention a century ago—and a century from now, it’s a safe bet we’ll be brewing our cuppa the same exact way. 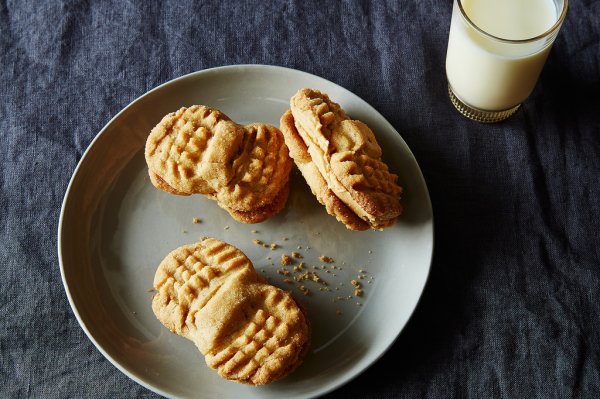 How to Make Nutter Butters at Home
Next Up: Editor's Pick