It was well into the night of July 30 when the mood shifted in Calais. Evening in the French port city had begun with familiar scuffles, pitting groups of illegal migrants against French police officers who blocked their access to the Channel Tunnel and its tantalizing gateway to England. But this was something different. Some 50 migrants–mainly Syrians–simply sat down and turned their backs on the gendarmerie in a peaceful demonstration.

The voice belonged to a 27-year-old Syrian who gave his name only as Adam. He said he had arrived in Calais four months ago, escaping the conflict raging in his hometown of Idlib–making him one of 4 million who have fled from their country’s brutal civil war. Adam’s pleas went unheard–the police continued to usher the migrants away from the railway complex for the Chunnel’s trains–but the sentiment represented the anguish felt by many of the migrants who try to cross into the U.K. every night from France. They have traveled thousands of miles in search of a new home and prosperity, and they are still searching.

This has been the year of the migrant in Europe. The refugees come from Syria, from across Africa, from Afghanistan and other places. About 137,000 asylum seekers have arrived in the first half of 2015 alone–an 83% increase from the same period last year.

As a crisis, this one has many dimensions. On the surface, it’s an immigration problem. The U.K. and other European countries say they need to be able to limit the unprecedented flow of migrants or they risk overwhelming their fragile economies. But an increasingly fractured E.U. has been unable to come up with a concerted response to what is the biggest refugee crisis since the end of World War II, with some 60 million people displaced by conflict and grinding poverty.

That political failure has turned an immigration crisis into a humanitarian one. More than 2,600 people have died this year trying to make the journey to the continent’s shores, turning the Mediterranean into the most dangerous border crossing in the world. In April, European leaders agreed to triple funding for coast guards and helicopters in the area, but hundreds continue to die on Europe’s doorstep: 200 people drowned on Aug. 5 when a boat stuffed with migrants capsized near the Libyan coast.

Some of those 60 million displaced people have fled their homes out of desperation because of conflicts like the Syrian civil war; others are seeking a better life in richer countries. But while international law protects political refugees–and not economic migrants–sorting them out has caused further political friction in Europe. Under E.U. law, the first country an asylum seeker arrives in is responsible for documenting and processing his or her application. If successful, a refugee has the right only to remain within that country. That means economically struggling border countries like Italy, Greece and Malta have had to deal with a disproportionate number of migrants. So it’s not surprising that there are frequent reports of authorities in those countries turning a blind eye to migrants wishing to try their luck farther north. And thanks to European principles of free movement, migrants who break through the E.U.’s external borders can move freely within it once they’ve landed.

At least until they reach Calais, where about 3,000 migrants are now blocked by Britain’s oldest border defense, the English Channel. The strait between England and the European mainland is at its narrowest here, and on a clear day the white cliffs of Dover can be seen just 21 miles away. Migrants have been trying to cross into the U.K. from Calais since the Kosovo war in the late 1990s. If they remain in Calais, they can try to apply for refugee status in France. But most migrants here speak English or have relatives in Britain. Though life as an illegal immigrant in the U.K. is far from easy, jobs are more plentiful–the E.U.-wide unemployment rate is nearly twice that of Britain’s.

In the past, migrants often tried to make the passage by stowing away in trucks that crossed the sea by ferry. With increased security around the port, the focus has shifted recently to the undersea Channel Tunnel, where migrants try to hide on freight trains and Eurotunnel shuttles carrying vehicles. Since June, at least nine people have died in attempts to reach England, falling from trains as they tried to hang on, killed by trucks on the motorway and even drowning in a canal at the tunnel entrance. That compares with a total of 15 migrant deaths for all of 2014.

The Jungle, as the dusty migrant encampments on the edge of Calais are known, has become a snapshot of the conflicts raging beyond Europe’s borders, sheltering hundreds of Syrians, Sudanese, Eritreans and Afghans. Though the Jungle sprang up without approval, it has evolved into a semipermanent slum that falls far below international humanitarian standards. Guidelines from the U.N. High Commissioner for Refugees recommend a maximum of 20 people sharing one toilet, but in the Jungle the number is 300. Piles of garbage attract rats and flies, and the air is thick with the stench of sewage and rotting food. “It is not a good life here,” says Nabeel Edris, a 29-year-old Eritrean who has spent six months in Calais trying to reach Britain. “It is not good at all.”

As the migrant crisis has worsened, Calais has come to resemble a fortress, with chain-link fences and coils of barbed wire running for miles around the city. In response to the heightened security, migrants are trying more dangerous methods to reach the U.K. On Aug. 4, a Sudanese man was arrested by British police after walking nearly the entire 31-mile length of the Channel Tunnel, dodging high-speed trains in the dark. Eurotunnel, the company that runs the shuttles through the railway terminal, said that since January it had prevented 37,000 attempts, describing “nightly incursions” of hundreds of migrants storming security forces at once in the hope that a lucky few would succeed. On the night of July 28 alone, a few hundred migrants made over 2,000 attempts to breach the entrance of the Channel Tunnel. One young Sudanese man died, most likely crushed by a truck.

British tabloids have sounded the alarm over fears of a “migrant invasion,” while politicians have called for the army to be sent to Calais to protect Britain’s borders. Police measures imposed to manage the disruption led to one of Britain’s main highways’ being blocked for several days. More than 4,500 vehicles lined up to cross into France, costing the British economy an estimated $390 million a day. Prime Minister David Cameron insisted that Britain would not become a “safe haven” for illegal immigrants, pledging more fencing and sniffer dogs and funding an additional 100 guards at Calais. On Aug. 10, new measures came into effect to reduce the state support that an asylum seeker could claim in Britain to roughly $57.55 a week, considerably less than the $88.67 offered in France.

While political ties across Europe have been strained by the migrant crisis, the gulf between the U.K. and its continental neighbors has particularly widened. Despite the tabloid outrage, Britain actually receives fewer asylum applications per head of population than the E.U. average, and Germany, France, Sweden and Italy all receive far more claims than the U.K. “We must push the British government to take its share of responsibility,” says Emmanuel Agius, the deputy mayor of Calais. But the groundswell of anti-immigration sentiment in Britain, most evident in the sudden rise of the right-wing U.K. Independence Party, shows how unlikely that will be. Cameron has promised to reduce Britain’s net migration to the “tens of thousands” from 298,000 in 2014 and to hold a referendum on Britain’s membership in the E.U. by the end of 2017, another sign that the U.K. is distancing itself from what it sees as Europe’s problems.

While nearly 1 in 8 U.K. residents is foreign-born, migrants who reach Britain rarely receive a warm welcome. Some disappear and try to work in the shadow economy, but those who wish to seek asylum through the proper channels have to present themselves to the authorities and face arrest on immigration offenses. Those judged to have legitimate claims can receive temporary housing and that $57.55-a-week living allowance while their claims are being processed–which often takes longer than the six-month target period. From March 2014 to March 2015, the Home Office granted protection to 40% of 25,020 asylum seekers. A migrant whose claim is rejected can appeal but will likely be sent to an immigration removal center and deported, or given money to leave voluntarily.

But many of the migrants in Calais have come so far that nothing would turn them back now. “Back home, you could wake up in the morning and go to work and die. You could die every day, any day,” says Tahir Dlil, a 26-year-old radiology graduate who fled the turmoil in Sudan a year ago and has been in Calais for more than four months. “Would we have come if there was peace? Why would we want to live like animals in the Jungle? No. We just want to live, to work, that’s all.”

Some migrants wearily accept that they will be in Calais longer than they would like: bored of borders, reads a sign outside one tent. In the Jungle, you can now get a haircut, have your bike fixed, even pray in an improvised mosque or church. Some enterprising residents stock up on goods in supermarkets in town, hawking them for a profit back in the Jungle. There are over a dozen pop-up shops, selling everything from cell-phone SIM cards and cigarettes to whiskey, Red Bull and Coca-Cola. At night, people dance to Michael Jackson songs under a disco ball in a makeshift club.

While some of his friends have decided to seek asylum in France, Dlil is confident his yearlong quest will eventually end in England. He spends his nights making the nine-mile walk from the camp to the railway terminal, displaying cuts from barbed wire and bruises from clashes with police. When asked how he usually spends his days in Calais, he breaks into a wide smile. “England,” he says with a grin. “I dream about England all day.” 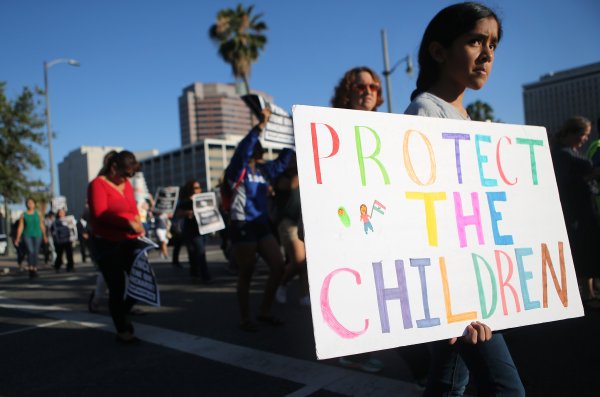 I Fled the Nazis as a Child Refugee. Trump's Border Policy Echoes Europe's Darkest Days
Next Up: Editor's Pick