These Are the 20 Best Beers in the World

In honor of International Beer Day, August 7, the beer-rating and -review site RateBeer.com has curated a list of the top beers in the world.

The 20 beers were selected for their world-class recognition — some are accessible, some are obscure — and their elegant variety of styles.

From brews with robust cherry aromas to a dessert porter with strong but sweet maple-syrup flavors, keep scrolling to find out which beers made the cut.

This stout out of Montreal, Canada, has aromas and flavors of vanilla, dark chocolate, bourbon, and roasted malt. Dieu du Ciel brewers consider this black ale a very smooth, mildly hopped dessert beer with a strength of 6.5% alcohol by volume (ABV).

A farmhouse ale from the brewers at Sante Adairius Rustic Ales in Capitola, California, this beer is dry and refreshing and made with the best local ingredients. Saison Bernice saw multiple yeast additions, including Brettanomyces, to enable further bottle aging and impart a slight sour flavor. Bernice clocks in at 6.5% ABV.

With a mix of lime, hibiscus, and blood orange, this saison is tart, refreshing, and expertly fermented by Hill Farmstead Brewing Company in Greensboro, Vermont. At 5% ABV, this brew is well carbonated with a medium body.

Copenhagen, Denmark’s finest brew is an oatmeal stout composed of 25% oat-based ingredients and a nice touch of gourmet coffee. Mikkeller suggests the beer with breakfast because of its lingering coffee flavors offset by a certain sweetness that makes this 7.5% ABV brew highly enjoyable.

This pale ale from the folks at Hill Farmstead Brewing Company is dry-hopped for bittering and flavoring exclusively with citra hops from the Pacific Northwest. Citra Single Hop has notes of grapefruit and tangerine, with a mild 5.5% ABV.

15. What Is Enlightenment? (Hill Farmstead)

In honor of its second anniversary, Hill Farmstead Brewing Co. created this American pale ale hopped with simcoe and amarillo hops. Orange and citrus aromas define this mild bodied beer with a 5.4% ABV.

This Belgian strong ale has a dark-brown pour and a thick head. It’s brewed in Westvleteren, Belgium by a group of Trappist monks and is sold only at the monastery. Westvleteren Extra 8 has found its type of beer drinker to be a person with a palate for dark fruits, malts, and chocolates, and a strong (8%) percentage of alcohol.

New Glarus Brewing Co. in New Glarus, Wisconsin, calls this brew Serendipity — and with apples, cranberries, and cherries aged in oak with a unique fermentation process, it’s just that. A strong and unexpected mix of Wisconsin flavors, Serendipty is a fruit ale with a 5.1% ABV.

Funky Buddha Brewery in Oakland Park, Florida, has managed to create a diner-style breakfast in a glass with its Maple Bacon Coffee Porter, which has aromas of sticky maple syrup, coffee, and cream. At 6.4% ABV, it finishes sticky, rich, and sweet, leaving behind a truly unique aftertaste.

Hill Farmstead brewers have created an India pale ale that uses citrusy hops from the Pacific Northwest. Grassroots Legitimacy is also made with two-row malted barley and oats, and is dry-hopped copiously with simcoe hops. The IPA pours a hazy golden yellow and is 6.7% ABV.

Santa Rosa, California’s Russian River Brewing Co. looked to the history of hops to create Pliny the Elder — the double IPA cousin to Russian River’s triple IPA, Pliny the Younger. Pliny the Elder is a strong and hoppy IPA with an ABV of 8%. It’s easily one of the most popular IPAs around.

This fruit beer from New Glarus Brewing is meant to be served very cold in a Champagne flute for optimal raspberry flavor. Oregon shares its harvest of berries with New Glarus, which the brewery then ferments spontaneously in large oak vats. This brew is extravagantly flavored and is 4% ABV.

Hill Farmstead Brewing Co. named Everett for the brewers’ grandfather’s brother. This porter was created in his honor and is crafted from American malt barley, English and German roasted malts, American hops, and Hill Farmstead’s own yeast. The result is a complex backbone of chocolate, coffee, and malty sweetness with a 7.2% ABV.

Despite being named for the largest T-rex fossil ever discovered, Toppling Goliath created a brew out of Decorah, Iowa, with a delicate body and robust aromas of grapefruit, citrus, mango, and evergreen. PseudoSue was originally brewed at 5.8% ABV, but the brewers note that future batches will rise to 7% ABV since translating the beer to a larger 30-barrel system.

Stillwater Artisanal Ales took Westbrook Brewing’s gose and amped it up to create Gose Gone Wild, a German-style sour wheat ale. The brewers added a massive dose of citra and amarillo hops, then fermented it with various strains of Brettanomyces yeast to create a juicy, hoppy flavor with a 4.3% ABV.

Brewers out of Munster, Indiana, from 3 Floyds Brewing Co. have taken citrus hops from the Yakima Valley in Washington State to create this medium-bodied, single-hop American pale ale. At 6.2% ABV, Three Floyds Zombie Dust is golden in hue and surprisingly but nicely hoppy for an APA.

The brewers at Hill Farmstead have created yet another beer that tops the list. At 6.2% ABV, Susan is an IPA that holds true to its hoppy tendencies. A perfect pour with a short white head, this beer has a nice blend of grassy and citrus notes.

Framboos (or Framboise, if you prefer) is a dark, ruby red lambic-style beer with no carbonation. Brewed in Beersel, Belgium, by Brouwerij 3 Fonteinen, this beer has virtually no head and a 5% ABV, with a strong raspberry flavor.

The folks at Hill Farmstead Brewery have created a beautifully complex saison by aging their Anna beer, a honey saison, in French oak wine barrels and allowing it to mature in the presence of microflora. The result is a 6.5% ABV, aromatic barrel-aged saison with hints of honey and citrus that’s true to its Vermont locale.

Each bottle of this Belgian-style red ale is brewed in Wisconsin with over a pound of Door County cherries. New Glarus Brewing Co. has perfected the balance to deliver a medium-bodied beer that’s highly carbonated and ruby red in color, with an ABV of 4%.

Read next: These Are America’s Best Cities for Barbecue 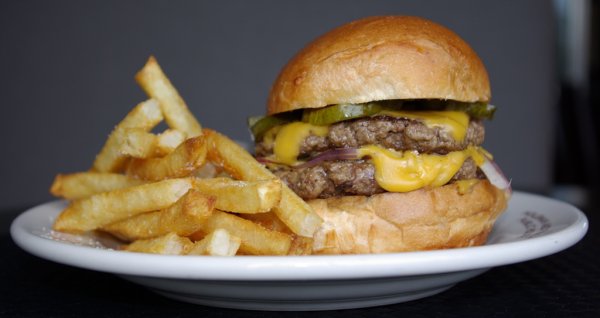 These Are the Best Burgers in America
Next Up: Editor's Pick