How Eero Saarinen Became One of America’s Best-Known Architects

Architect Eero Saarinen with the model of the new proposed US Embassy in London, June 5, 1956.
Ron Case—Getty Images
By Jennifer Latson

It would have been difficult for Eero Saarinen to escape the pull of architecture. Born on this day, Aug. 20, in 1910, to Finland’s top architect — Eliel Saarinen — Eero grew up surrounded by blueprints and building models. His father’s studio doubled as the family’s immense living room, where Eero and his sister, Pipsan, mingled with the ever-present draftsmen and designers.

“Such a beehive of cultural activity was calculated either to smother or force the children,” TIME noted. “In the case of Eero and Pipsan, it forced. By the time Eero was five, his talent for drawing had shown itself. Sitting under his father’s drafting tables, he busily turned out his own versions of door details and houses.”

Of course, Eero didn’t remain in the shadow of his father’s drafting tables; he flourished in his own right. That he made a name for himself — apart from the family name — is evident in TIME’s 1956 cover story, which proclaimed, “…of the whole U.S. cast of modern architects, none has a better proportioned combination of imagination, versatility and good sense than Eero Saarinen.”

But as Eero told TIME, he owed a good part of his success to his father, who was both his role model and longtime collaborator. While the elder Saarinen was alive, according to the New York Times (in a 1953 profile written by the art critic whom Eero would later marry), “Eero neither rebelled nor rejected: he remained architecturally, as well as filially, deferential.”

“I often contributed technical solutions and plans,” Eero is quoted as saying, “but only within the concept he created.”

Still, the Saarinens were innately competitive — and had a knack for winning contests. At age 12, per TIME, Eero placed first in a matchstick design contest sponsored by a Swedish newspaper, winning 30 Swedish kronor — or about $8. The same week, his father was a runner-up in an international contest to design the Chicago Tribune Tower, and won $20,000.

The tables eventually turned in Eero’s favor, however, creating at least one awkward scene at the Saarinen house. Both father and son — separately — entered the 1948 competition to build a monument for the Jefferson National Expansion Memorial in St. Louis. Per TIME:

Read more about Eero Saarinen from 1956, here in the TIME archives: The Maturing Modern

For your security, we've sent a confirmation email to the address you entered. Click the link to confirm your subscription and begin receiving our newsletters. If you don't get the confirmation within 10 minutes, please check your spam folder.
Most Popular on TIME
1
How President Biden Handles a Divided America Will Define His Legacy
2
Kellyanne Conway Said Rape Would Not Happen If Women Were Stronger
3
Theologian Russell Moore Has a Message for Christians Who Still Worship Donald Trump 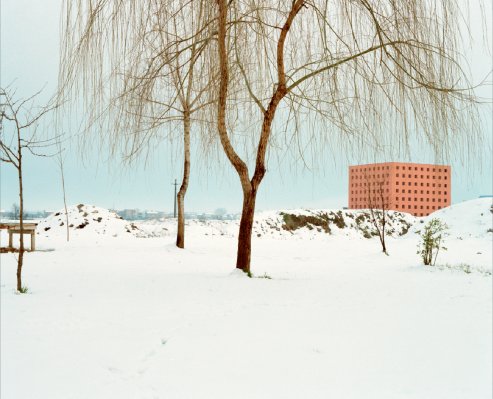 Explore the Relationship Between Photography and Architecture
Next Up: Editor's Pick