Mainland Americans have been making their mark on Hawaii — in ways both welcome and unwelcome — since the early 1800s, when Protestant missionaries first landed there and, per TIME, “devised a Hawaiian alphabet, soon printed a speller… promoted monogamy, [and] introduced the spare, hardy architecture of New England whaling ports.”

While the U.S. annexed Hawaii as a territory in 1898 under somewhat shady circumstances — and over the objections of many Hawaiians — by the 1950s most Hawaiians were in favor of being admitted as a state. When the state reached that milestone, on this day, Aug. 21, in 1959, just seven months after Alaska had joined the Union, Hawaii underwent immediate and radical change, largely in the form of unprecedented economic growth.

The cluster of islands that comprise America’s 50th state are some of the world’s most isolated: 2,390 mi. from the West Coast and 4,000 from Japan. But with statehood came a proliferation of commercial flights that connected Hawaii to the mainland and brought a massive influx of tourists.

Three days after Hawaii was admitted to the Union, Pan American became the first airline to provide jet service to the newest state, according to the Los Angeles Times. This convenience changed the face of Hawaiian tourism entirely. “The islands, which had been the playground of well-heeled visitors, most of whom traveled by ship, began welcoming middle-class travelers,” the LA Times notes.

As TIME reported in 1966, the years after statehood became a “jet rush,” in which the number of passengers arriving annually at Honolulu’s airport more than doubled — many of them vacationers who snapped up $100 tickets for the five-hour flight from Los Angeles or San Francisco. TIME observed:

This jet-fueled increase in tourism was not Hawaii’s only area of growth. The state also saw a rapid expansion in light industry — companies producing “everything from muumuus to mirrors,” per TIME — and diversification in agriculture. The flurry of commercial activity led to a corresponding boom in development: In 1964, construction spending was up nearly 20 percent from the previous year, and included a $27 million high-rise on Waikiki Beach that was then the world’s largest single-unit apartment building, according to TIME.

Additional projects included a $14 million business complex in downtown Honolulu as well as freeway expansions and new planned communities. Other signs that 1964 was a banner year for the Hawaiian economy, by TIME’s account: “Four new mattress factories have been opened, and Schlitz is about to build a 100,000-barrels-a-year brewery near Pearl Harbor.”

For your security, we've sent a confirmation email to the address you entered. Click the link to confirm your subscription and begin receiving our newsletters. If you don't get the confirmation within 10 minutes, please check your spam folder.
Most Popular on TIME
1
Bernie Sanders Mittens Memes Take Over Social Media
2
President Trump Presses a Button in the Oval Office to Get a Coke
3
How President Biden Handles a Divided America Will Define His Legacy 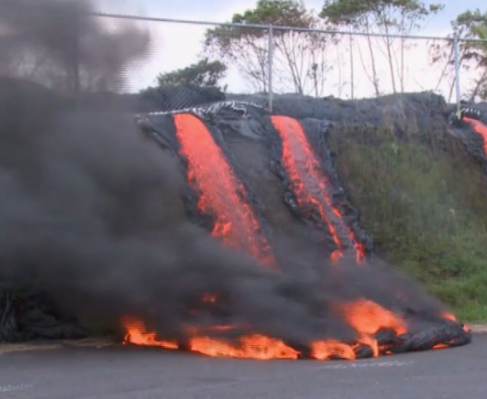 Lava Advances on Hawaii Town
Next Up: Editor's Pick