Bomb Blast Kills At Least 47 in a Nigerian Market

A bomb blast at a market in northeastern Nigeria killed at least 47 people and wounded dozens others on Tuesday, AFP reports.

The explosion occurred at around 1:15 p.m. local time in the mobile phone section of the market, located in the village of Sabon Gari in the state of Borno. The bomb had been hidden in a knapsack used for dispersing pesticides, which the perpetrator then abandoned, leaving it to detonate during peak trading hours.

A source at a hospital in the town of Biu told a local newspaper that 41 people had been admitted for injuries, and that many of those who had died were “mostly burnt or battered beyond recognition.”

Though no individual or group has claimed responsibility for the attack, witnesses noted that it resembled the work of Boko Haram, the Islamist extremist group that frequently targets crowded public venues in Nigeria and nearby countries. The group, which has killed over 15,000 people since 2009, has ramped up its attacks since the inauguration of President Muhammadu Buhari in late May of this year.

On Tuesday, President Idriss Deby of Chad said publicly that an ongoing multilateral military operation in western Africa had succeeded in “decapitating” Boko Haram, and that the group’s new leadership sought negotiations with the Nigerian government. 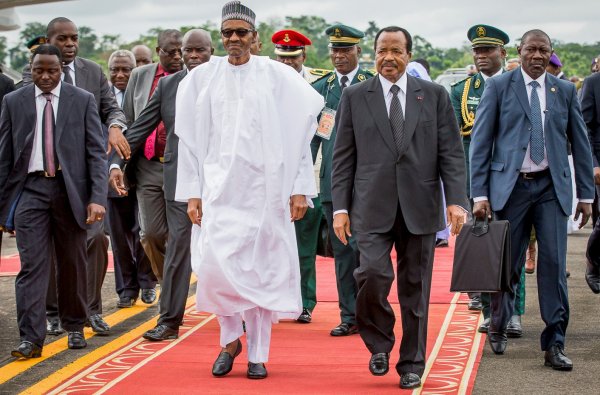 Nigeria Frees More Than 50 People From Boko Haram
Next Up: Editor's Pick