It’s a testament to the vibrancy of Robin Williams that, even a year later, his death remains a cultural touchstone, the psychic shock we can’t quite get over.

The Oscar winner and star of modern classics like Good Morning, Vietnam, Dead Poets Society and Mrs. Doubtfire died by suicide a year ago Tuesday. Though he privately wrestled with addictions and illness, including a form of dementia that may have contributed to his death, Williams was – and still is – a vivid presence for family and fans.

“We try to focus on the joyful moments and memories,” Williams’ son Zak, 32, recently told PEOPLE, noting what would have been his father’s 64th birthday on July 21. “We’re moving through the process of healing and recovering,” he continued, adding that he relies on “wonderful family and friends” to help with the grief.

In honor of his father, who generously gave of his money, time and influence to various causes (most famously the homelessness charity Comic Relief), Zak also gives back. The tech executive teaches financial literacy to inmates in San Quentin State Prison, providing his students with invaluable budgeting and investing skills.

Williams’ other children, Zelda, 26, and Cody, 23, spent their father’s birthday quietly, with Zelda posting on Instagram on July 20 that she was taking a break from social media. “It’s a time better served away from the sentiments or opinions of others,” she said, expressing a wish to pass the day in private.

However Williams’ family chooses to mark the milestones after his loss, including this anniversary of his death, the late actor’s public presence continues to resonate. Longtime friend Bobcat Goldthwait credits Williams with helping to champion his upcoming documentary about fighting child pornography, Call Me Lucky.

“This movie would not have gotten made, or been what it is, without Robin’s support and influence,” Goldthwait recently told PEOPLE, revealing that his friend put up the seed money for the project. “His generosity and kindness are well known.”

As was his talent. Critics found much to admire in Williams’ last on-screen performance as a closeted gay man in Boulevard. (He also has a voice role in the Simon Pegg comedy Absolutely Anything, in theaters Sept. 15.) It was one of his quieter, more contained turns, all the better to take in the enormous range of his acting talent. He was, quite simply, a man with so many more parts in him – and to him.

“We never got off the phone without saying, ‘I love you,’ so I know that’s the last thing he and I said to each other,” says Goldthwait of his old friend, whose death is just beginning to register for him. “It’s strangely starting to feel like I’m only processing it now.”

On that, he may well speak for many of us. 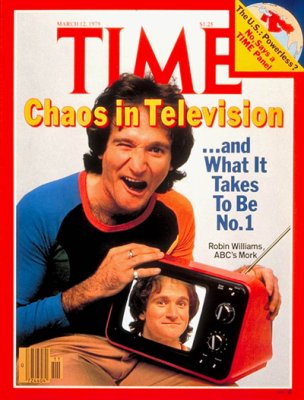