Kentucky Sen. Rand Paul said Monday he is ready to refocus his presidential campaign on attempting to take down Republican front-runner Donald Trump.

On a conference call with reporters, Paul, whose campaign has languished in the polls amid tepid fundraising and a shifting politics on national security issues, said he is planning to expose Trump as “an empty suit full of bravado but not anything meaningful for the country.”

“Are we going to fix the country simply through bombast and empty blather,” he asked.

Barely seconds into the inaugural GOP presidential debate last week, Paul sought out a fight with Trump, criticizing his unwillingness to rule-out a third-party bid. “This is what’s wrong,” Paul exclaimed at the start of the event. “He buys and sells politicians of all stripes, he’s already hedging his bet on the Clintons. If he doesn’t run as a Republican, maybe he supports Clinton, or runs as an independent.”

On the call, Paul explained his decision to go aggressively negative on Trump, the reality television star and real estate magnate. “If no one stands up to a bully, a bully will keep doing what they’re doing,” Paul said. “And unless someone points out that the emperor has no clothes, they’ll continue to strut about and what we’ll end up with is a reality TV star as the nominee if we’re not careful.”

“I’m at the point where I’ve decided, you know what, someone is going to have to say that, “he added. “It’s high time that somebody does stands up and really call nonsense nonsense.”

“You know while some people are excited by fat jokes and stupid jokes, I think there are a lot of people in the general election, independents as well as probably many women voters aren’t really that entertained by this and I think it shows in the polls,” he said.

Paul is not the first GOP candidate to seek to boost themselves by taking aim at Trump. Former Texas Gov. Rick Perry went aggressively negative on the front-runner last month in a failed effort to earn a spot on the GOP debate main stage, while former HP CEO Carly Fiorina has emerged as a more recent critic as she has gained new prominence after a well-regarded performance in the undercard debate last week. 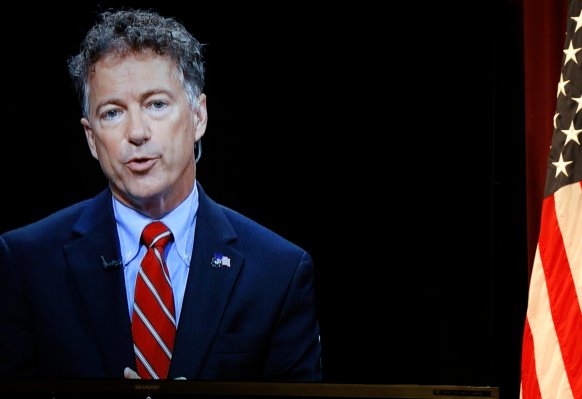