Bumble Thinks It's Found a Way to Weed Out Jerks Online

The makers of the popular dating app Bumble say they have found a way to identify jerks—and keep them away from you.

Bumble is similar to Tinder but puts women in control. The app doesn’t allow men to initiate conversations, cutting down on unwelcome advances. Female users must start conversations with a match before he can reply. This month, the company is launching a new feature intended to further improve the sometimes wonky dynamics of online dating, Bumble told TIME exclusively.

Changes to its algorithm will thin out flakes, jerks, and trolls. The software will measure how users behave on the app, then reward “good” behavior with a verified status (dubbed “VIBee”) that can act as a filter much the way age might.

The idea isn’t entirely new. A niche of highly selective dating apps such as The League, which screens for “ambitious” users based on their elite colleges or high-paying jobs, are trying to find ways to filter through masses of online daters. Bumble founder Whitney Wolfe says VIBee status has nothing to do with external markers of social status, but how users conduct themselves on the app. “Their pre-vetting is based on what you do outside the app and where you went to school, our pre-vetting is about how you behave in the app,” Wolfe explains. “If you didn’t graduate from Harvard you can still earn your way in.”

Wolfe says that Bumble isn’t about browsing, but making connections. Evaluating behavior on the app is aimed at furthering that goal. “We want to reward those users who have been good members of the community,” she says. “It’s about rewarding, not excluding.”

What is “good” behavior on Bumble? Users can earn VIBee—a play on VIP and with Bumble’s bumble bee logo—status by responding to messages and by swiping judiciously. The algorithm looks out for users who swipe right on everyone to cast a wide net, and for users who never swipe right at all. Anyone who has been reported for harassment on the app is not eligible for VIBee status, unless Bumble administrators have investigated and dismissed the complaint. Users with VIBee status will be able to search only for other VIBee-status users.

“We were able to look into user activity and see who was consistently responding to messages, people who have never been reported for inappropriate behavior, people who made sure their profiles were a fun reflection of themselves, etc,” says Sarah Mick, who is Head of Product and Design at Bumble with fellow Tinder veteran Chris Gulczynski. “VIBee was really created as the first step to rewarding these users.”

Wolfe, 26, was a co-founder of Tinder who was ousted from the company in 2014. She founded Bumble shortly afterwards. Earlier this year, Wolfe told TIME she hopes forcing women to make the first move would change the landscape of online dating.

In the eight and a half months since Bumble was founded, spokeswoman Jennifer Stith says it has seen 15% week-over-week growth. Wolfe says the app has between 800,000 and a million users, with a roughly equal gender ratio that’s skewed slightly female. The company hopes VIBee will help further fuel its growth. “We’re not just trying to show faces to people,” Wolfe says. “We’re trying to facilitate connections.” 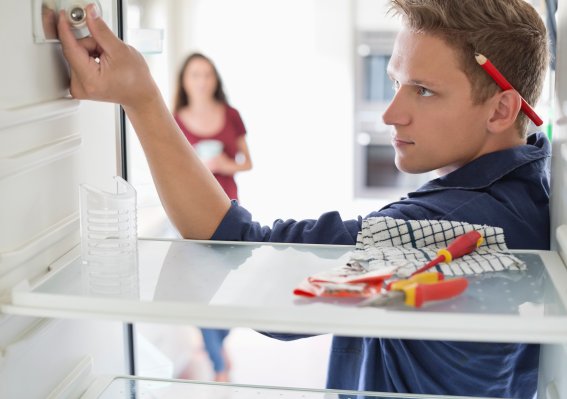 7 Apps to Help You Get Stuff Done Around the House
Next Up: Editor's Pick