Louis C.K. Releases New Show Online, Asks Fans to Pay Whatever They Think It's Worth

Following the revelation that Louis C.K. is taking an “extended hiatus” from his FX comedy series, Louie, the comedian has released a new show for his fans. It’s called Louis C.K. Live at Madison Square Garden, it’s available on his website, and it comes with a special note from him.

Some of that material was also in his previous Comedy Store special, so C.K. is letting fans decide how much it’s worth to them. He says those who want to buy it can pay anywhere between $1 and $85, though $5 is currently set as the default.

“There isn’t much else to say,” his note continues. “I’m having a pretty nice summer and I hope you are too. I feel pretty good about the planet, the country and my immediate surroundings, even though a lot of things are a huge mess all over the world. It may be selfish, or naive or even calloused to feel pretty good ever about anything when anyone anywhere is having a bad time and there sure are a lot of anyones everywhere having a bad time. But then again if you’re upset all the time because something bad is happening every second, then jesus. I mean… for christ’s sake, take it easy.”

The creator, star, writer, and producer of Louie made 61 episodes of the series since its debut in 2010. As FX CEO John Landgraf said Friday during the Television Critics’ Association press tour, C.K. is anxious to work on other projects. Landgraf also agreed with one critics’ suggestion that this situation is similar to the one with HBO’s Curb Your Enthusiasm — in other words, the show will remain on hiatus until C.K. is ready to make more. 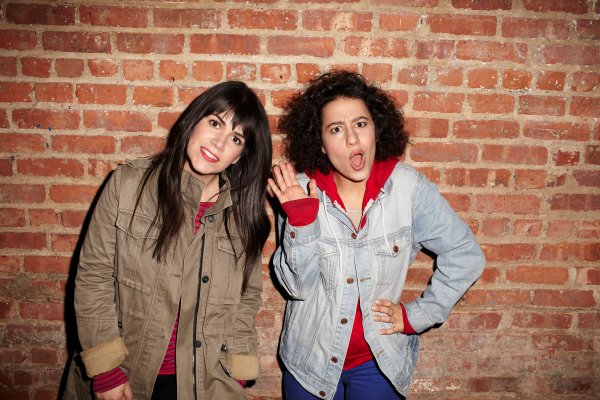 Watch Abbi and Ilana From Broad City Show Off Their Spectacular Lip Sync Skills
Next Up: Editor's Pick