How 2 Women Won an All-Male Debate

It was the B-team debate, the kiddie table, the JV squad not ready for the big leagues, the Republican candidates who couldn’t break into the top 10 in GOP presidential polls to make the Prime Time debate later that day. The hall was fairly empty and the online jokes were flying. All eyes were on Rick Perry who was, by most estimations, the one who “deserved” to be on the main stage with the big boys, and the one to beat. He almost made the cut to the main stage but in the end was bested by Ohio Governor, John Kasich, and relegated to the undercard.

As the debate progressed, however, there seemed a clear champion and it wasn’t Rick Perry, or Rick Santorum, who was Mitt Romney’s runner-up in the GOP presidential primary election of 2012. It was Carly Fiorina, former CEO of Hewlett-Packard and the only woman in the race on the GOP side.

All presidential candidates have to strike the right balance between strong, smart, decisive, humble all while thinking of good answers to complicated questions on the spot. For women, the judgement on how they speak is much more severe than for men. Uptalk, vocal fry — women get a lot of criticism on the way they sound that men simply don’t. Sarah Palin’s accent, for example, was widely mocked while men with various accents, like Lindsey Graham, don’t get quite the same level of contemptuous teasing. When moderator Martha MacCallum asked Fiorina during the debate if her self-comparison to Margaret Thatcher was a stretch given her low poll numbers, Fiorina responded with grace and finesse. She talked about the low poll numbers of other candidates historically at this point in the race, such as eventual presidents Reagan, Clinton and Obama, and about the kind of leadership she would bring to the presidency. She was calm, smart and earnest. Her pitch was perfect.

She fielded questions about her conservatism and she went after the presumed front-runner: assuming the Donald Trump show comes to an end in the near future, Jeb Bush. She criticized his “I’m not sure we need half a billion dollars for women’s health issues” gaffe for giving Democrats a campaign ad before the campaign has even begun.

Her fearlessness paid off. Twitter exploded with Fiorina-love. Eighty-three percent of respondents in a Fox poll thought she’d won the debate. Still, people like Jack Shafer at Politico dismissed the positive reaction Fiorina had gotten and proclaimed that of the B-team, only Rick Perry looked like a president. Fiorina might respond: “What does a president look like, exactly?”

Post-debate Fiorina was on Hardball where Chris Matthews did his trademark yelling over his guest and she managed to render him speechless and admit he could understand the hype around her.

The other winner of the night isn’t even running for president. It was moderator Megyn Kelly, whose tough but fair questions exposed weaknesses and holes.

A candidate with many such weaknesses, who didn’t appreciate Kelly’s questions at all, was Donald Trump.

Kelly got the ultimate only-for-women insult from Donald Trump: she was not being nice. Trump took to Twitter, at 3am, to berate Kelly, saying she “bombed.” The next day, he went on various shows to say Kelly “behaved very badly.”

Frank Bruni at the New York Times called Kelly Trump’s “appointed slayer” but also noted she went after the weaknesses of the other candidates in the same way. Her method was fierce, but forcing the candidates to really look at their vulnerabilities can only be a good thing for the Republican field at this stage in the race.

On the other side of the aisle, there was Hillary Clinton, whose Instagram shots with Kim Kardashian, Kanye West and Kris Jenner surfaced just as the debate was winding down. “Kardashian support!” — the shots seemed to say — “Trump that!” Fiorina and Kelly only seemed even more serious by comparison.

Politicians get criticized for not having “enough” women around, but it only took two to win the whole night. 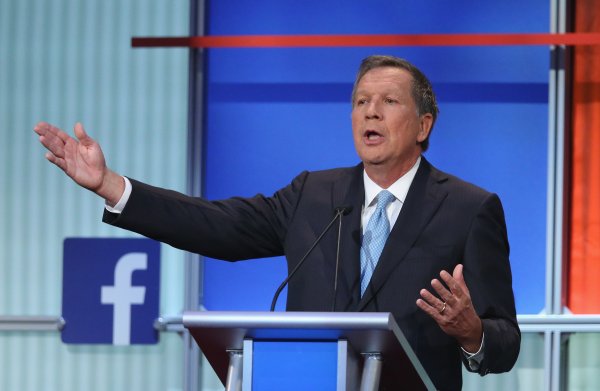 John Kasich Could Be the GOP’s Pope Francis Candidate
Next Up: Editor's Pick