Watching the Republican Debate With the Clinton Campaign

In Hillary Clinton’s humid campaign headquarters in Brooklyn, a few dozen campaign staffers gathered after hours to watch the Republican debate. As they readied their rapid response, they tossed around synonyms for their views of their potential Republican opponents. “Backward looking.” “Out of touch.” “Out of date.” Maybe just “Lord have mercy.”

As Jeb Bush began recounting how he had defunded Planned Parenthood as governor of Florida, Clinton campaign manager Robby Mook resorted to pantomime. “Just roooooll back the clock there,” Mook said slyly to a reporter, turning his fists backward like a boxer pummeling a punching bag in reverse.

This is the new modus operandi of the Clinton campaign. The gauzy introductory phase is over, and she’s sharpening her attacks on the Republican field, zeroing in on an overall argument that they are behind the times. They were sure enough that the Fox News debate in Cleveland Thursday would help make their case that they invited a handful of reporters to watch them watch the debate.

“We think this is a really destructive night for the Republican Party,” communications director Jennifer Palmieri said afterward. “Hillary Clinton was not on the stage, but we felt that she was the clear winner.”

Clinton didn’t join in. Instead, she held court at a Hollywood fundraiser with Kim Kardashian, Kanye West, Usher, Jessica Alba and others. But she’s not leaving the criticism to her staffers, either. In Denver on Tuesday, she seized on the theme by arguing that a Republican forum in New Hampshire was “just a recitation of out-of-touch, out-of-date policies,” citing GOP views on women’s health, Wall Street reform, trickle-down economics, the minimum wage, immigration and the Iran nuclear deal.

In an email to supporters signed by her after the debate, she kept at it. “Right this minute, ten Republican men are on national TV, arguing over which one will do the best job of dragging our country backwards,” she wrote.

Of course, both can play that game. The Republicans being watched in Brooklyn were arguing that Clinton was the one who was out of touch. “This election better be about the future, not the past,” said Florida Sen. Marco Rubio. Republican National Committee Chairman Reince Priebus had a similar take. “One thing is certain: our candidates all offer a better vision for the future than Hillary Clinton,” he said in a statement.

The Clinton headquarters set up a small army of staffers to mount the attack. Fifteen or so crowded into a hot room around a large TV, firing off the campaign’s “Briefing” to break down the candidates’ comments. A couple dozen digital staff helped upload material while extra staff gathered for fun with beer and chips to watch the debate. Meanwhile, down the hall from the hubbub, Clinton aides gathered with the press corps.

The prevailing sentiment seemed to be incredulity. When Trump argued that the only rude remarks he’d made against women were targeted at TV personality Rosie O’Donnell, strategic communications adviser Karen Finney laughed. “Please keep this guy in, please!” she said.

They also snickered when Kentucky Sen. Rand Paul said he didn’t want “my marriage or my guns” registered in Washington. “Don’t you get marriages registered at the statehouse?” said Jesse Ferguson, deputy national press secretary for the campaign.

“They seem to be focused on sparring with each other rather than sharing new ideas,” said Palmieri during an early commercial break.

Campaign-made posters with quotes of the Republican candidates complimenting Clinton in the past lined the room: Trump calling Clinton a “terrific woman,” Rubio complimenting her for “her hard work,” Bush saying she has “dedicated her life to serving and engaging people across the world in democracy,” and former Texas Gov. Rick Perry calling her a “very, very capable public servant, great Secretary of State.”

The soiree for reporters at the Clinton campaign headquarters, with pizza, Coca-Cola and a large television showing the debate, is a tactic for candidates trying to stage-manage the reaction to the staged spectacle of a debate. Barack Obama’s campaign hosted debate parties in 2008 for supporters, while Mitt Romney fans did the same in 2012.

On Thursday, the GOP hosted parties in swing states Thursday night, and the Working Families Party, a progressive group that challenges establishment Democrats and Republicans alike, held an event a couple miles away in Brooklyn to watch the debate.

For the Clinton campaign, the goal of the night was in part to keep sharpen its attacks on Republicans. Before the debate, the Clinton campaign released a video that set the time for the night using the social media term “Throwback Thursday” to cast the candidates as beholden to the past. In the video, each candidate made a cameo, outlining their ideas over a funk soundtrack that could have been ripped from 1971’s Shaft.

Still, by moving so quickly to attacking the other side, Clinton risks looking over-confident about the Democratic primary. Even as the Clinton camp was tweeting outrage at the Republican field, former Maryland Gov. Martin O’Malley’s campaign had set up a rapid response room in an aide’s apartment in Baltimore that was aimed at her as much as the GOP.

“Rather than just attacking Republicans, it’s time for every Democratic candidate to stand up, say where they stand on the issues and walkabout the things they’ve gotten done,” said O’Malley’s deputy campaign manager, Lis Smith. “Beating up on the 10 Republicans on stage tonight will move forward the debate as much as Donald Trump’s attacks on New Americans.”

Vermont Sen. Bernie Sanders, who has gathered support of a sizable chunk of liberals in the Democratic Party, personally tweeted in reaction to the debate.

“The very rich get richer, everyone else poorer,” he tweeted. “And Republicans who take campaign money from billionaires have nothing to say.”

Then: “It’s over. Not one word about economic inequality, climate change, Citizens United or student debt. That’s why the Rs are so out of touch.”

But while they were strictly aimed at Republicans, they touched on some hot-button issues among progressive Democrats who will be deciding the primary: economic inequality, billionaire campaign donors and student loans.

Clinton may be ready to move onto attacking Republicans, but she still has Democratic challengers to reminder her there’s a primary to get through. 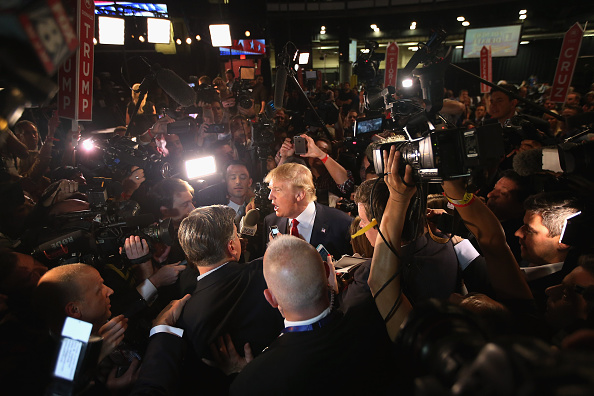 What You Missed in the GOP Debate
Next Up: Editor's Pick