Salma Hayek on Her New Movie, the Power of Animation and the 'Beast' Donald Trump

Salma Hayek’s new passion project is like Fantasia for 2015. The animated film, out Friday, adapts Kahlil Gibran’s iconic 1923 collection of prose poems, The Prophet, into a story about the release of a political prisoner, Mustafa, who shares philosophical lessons with his followers along his journey. Each lesson is animated by a different illustrator for the film, each of whom create their own lyrical worlds. Hayek, who produced the film and voices the part of Kamila, says that it’s meant to appeal to both adults and children, who are “profound thinkers.”

TIME caught up with the actress ahead of the film’s release to talk about her relationship to the classic book, plus the state of modern politics.

TIME: How did you first discover The Prophet?

Hayek: The book was always in the bedside table of my grandfather. On the cover it had the drawing of a man that was actually drawn by Kahlil Gibran, because he was also an artist. I was haunted by this face—not in a bad way—and I associated it with my grandfather. I was very close to my grandfather, and he died when I was six. Later on, when I was 18 or 19, I found the book in someone’s house and I borrowed it, because I saw the face—I didn’t even know it was called The Prophet, I just saw the same face. It made me think of him, and I wanted to see what was it that he was reading—that was always there, so important.

When I read it, I felt like my grandfather was talking to me and teaching me about life through this book, and teaching me about who he was through this book. It became a very special book for me. And I thought it was so personal and intimate because of this story to me, but then I realized it was so special and intimate for many reasons to so many different people. I discovered it’s sold more than 120 million copies around the world, and that many people use it in their weddings and funerals.

Why did you want to adapt it into a film?

I think the reason why people come into the film is because it talks about the simple things in life that bring us all together. I thought there was a great opportunity to make a film about connection. People today, when they think about connection, they think of the Internet. For my work that I do as a humanitarian, I worry about how people are becoming detached from their humanity, and how life in some places and in some ways has lost a lot of value. I think that when people read this book, they recognize in some phrases—they feel like they’ve read it before, or there’s something familiar to it. It’s not because you read it before—it’s not your brain recognizing it, it’s like your soul is recognizing it, and telling you that this is the truth. Through art was the easiest way to get to that place. That’s why the film is a combination of music, many types of visual art, the beauty of the storytelling of cinema, and—of course—poetry.

What inspired the choice to make use of animation instead of live action?

Because every animator had absolute freedom to tell their perspective on the poem. I also wanted it to be for all generations. Kids are profound thinkers. Animation is limitless, and it’s art, so it’s closer to the soul—to be able to do the poetry in images allowed the young kids that don’t understand some of the words to understand the concept of the poem. It goes directly to their subconscious.

The cast features so many impressive actors—Liam Neeson, Quvenzhane Wallis. How did you get them involved in an animated film?

Liam Neeson didn’t have the script when he came to the poems because he knew them all by heart. Quvenzhané had never read the book but I convinced her. She read the script, she liked it. Then when she saw the film she wanted to know everything about Kahlil Gibran, and she wanted to read the poems. She said she was mesmerized by the images of the poems, so she wanted to see them now in words.

Which is your favorite section?

Different ones for different reasons. “On Children” because I love the song, and I love the poem. That’s my favorite. “On Freedom” because I love the visuals. “On Work” not only because it’s amazing, but I know how the artist did it. It just stuns me, the way she works. It’s Van Gogh-ish, the way the images keep on forming—she does that all in one hard surface. She puts the substance that she invented and she paints the whole animation, all of it, in that same surface. She transforms it, and she does it all with one finger.

What do you see as the political themes of the film?

There are a lot. It’s not so much political as it is uplifting and hopeful and spiritual. But some of the political themes are probably freedom of speech, and equality. You know what happens—we turn human rights issues into a political tool. So some of the themes might seem political because we do that—we make them look political because people use them to get votes, to attack someone else, but in reality they’re human issues.

Mustafa seems like such an ideal political leader compared to the candidates that we see in the U.S. today. How could someone like Donald Trump, for instance, learn from Mustafa? 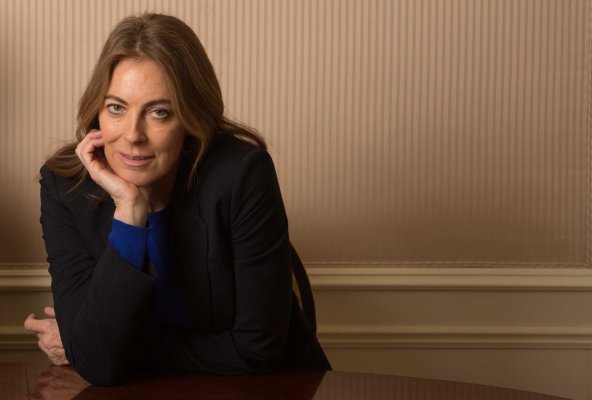 How to Solve Hollywood's Woman Problem
Next Up: Editor's Pick