The Long Journey From North Korea to Freedom

No matter where you are, there’s no country on earth more distant than North Korea. Satellite pictures taken at night show it in utter darkness next to its blazingly lit neighbors South Korea and China. The lack of light is a matter of electricity–outside the capital, Pyongyang, North Korea has virtually none of it–but it’s also an apt symbol for a country that is entirely cut off from the rest of the world. In an age when we can see nearly every corner of the planet, when we can communicate with almost anyone, when information seems infinite, North Korea is a black hole. Nothing, and no one, leaves it.

Almost no one. Since the division of North and South Korea in 1953, thousands of North Koreans have risked their lives to flee the country, most ending up in China or eventually South Korea. Some left to escape the horrific political persecution that became a fact of North Korean life under the totalitarian rule of the country’s first leader, Kim Il Sung, then continued under his son Kim Jong Il and now his grandson Kim Jong Un. But far more made the perilous journey–especially once a devastating famine began to take hold in the 1990s–because their only other choice was starvation. “The famine arrived,” defector Joseph Kim writes in his new memoir, Under the Same Sky: From Starvation in North Korea to Salvation in America. “Everything disappeared slowly, as if by evaporation.”

Kim’s harrowing memoir is the best of a trio of books published this summer by North Korean defectors; the others are Hyeonseo Lee’s The Girl With Seven Names: A North Korean Defector’s Story and Eunsun Kim’s A Thousand Miles to Freedom: My Escape From North Korea. More defectors will release memoirs this fall. These follow on the heels of older best sellers like The Aquariums of Pyongyang and Escape From Camp 14, accounts of the excruciating experiences of North Koreans caught in the country’s gulags. Even fictional tales of the Hermit Kingdom captivate–Adam Johnson won the Pulitzer Prize for his 2012 North Korea novel, The Orphan Master’s Son.

In the ultimate stamp of modern approval, defectors like Joseph Kim and Lee have become hits on the TED circuit–Lee’s 2013 talk has been viewed more than 4.2 million times. Popular fascination with the survivors of repressive regimes isn’t new–Aleksandr Solzhenitsyn won the 1970 Nobel Prize in Literature for his accounts of the Soviet prison system, and the imprisoned Chinese literary and social critic Liu Xiaobo was awarded the 2010 Nobel Peace Prize. But even at their worst, countries like the Soviet Union or China or Khmer Rouge–era Cambodia were less mysterious than North Korea. Aside from the heavily controlled messages that the North Korean government itself sends out, defectors are the sole sources of information about life in the country. They are the only light that escapes.

This new crop of defector memoirists is young–in the U.S., they’d be considered millennials–and unlike many of their predecessors, they weren’t direct victims of the government. Their earliest years were spent, if not in comfort, then in safe, intact families, with enough to eat. They went to the movies or watched the homemade TV dramas that began at 8:45 sharp each night. (“If you ever wanted to invade North Korea,” Joseph Kim writes, “that would be the time to do it, because half the country would be at a neighbor’s house waiting for a show to begin.”) They breathed the propaganda of the Kim regime as they did the air around them. Lee tells a story of the time her stepfather risked his life to save the family’s portraits of Kim Il Sung and Kim Jong Il from a house fire, “an act of heroism that would win a citizen an official commendation.” Eunsun Kim recounts the mass hysteria that greeted the death of Kim Il Sung on a rainy July 8, 1994, when distraught TV anchors told their audiences that the sky itself was mourning the death of the Great Leader. “I truly did believe,” she writes.

That life ended when the famine began. As with everything else in North Korea, reliable numbers on the 1990s famine are hard to come by. But the cessation of Soviet aid after the end of the Cold War, a series of cataclysmic floods and the total failure of any government response devastated North Korean agriculture. International experts put the death toll in the hundreds of thousands, perhaps even the millions.

The real value of these memoirs is the way they describe life during one of the greatest disasters the world has ever known–and one of the most secret. Each one of these authors knows what it is to starve; each one has watched family members die. They go to any lengths to survive–Joseph Kim at one point joins an Oliver Twist–like band of adolescent thieves, a hazardous act in a country where stealing something as small as a manhole cover can lead to a death sentence.

In a world where 800 million people go to bed hungry each night, starvation is a story that is still too common. But for North Koreans who truly believed that their leaders would protect them, the famine was as much a psychological catastrophe as a physical one. The government–which at one point launched a “Let’s Eat Two Meals a Day” initiative as its people starved–could or would do nothing, even as the North Korean elite had access to cognac and lobsters. In 1996, desperate to reach kin who might have food, Joseph Kim and his family took a train so crowded with others seeking refuge that passengers crouched on the roof and hung from the windows. There were no ticket takers, no security, no information. “Everyone in the West talks about the oppressive, invasive government of North Korea, but what I experienced then was more frightening to a child: a complete absence of authority of any kind. A child wants someone to be in charge of the world. But it was clear from the train that the people in charge had abandoned it to the masses. No one was enforcing the rules any longer.”

Joseph Kim eventually escaped to China–just beginning to prosper thanks to economic reforms of the 1990s–where he was taken in by Chinese Christians before he made it to the U.S. with the help of American activists. Eunsun Kim and Lee reached South Korea via China. Their North Korean stories have the rare happy ending, though Joseph Kim, who lost his entire family, notes that for famine survivors like him, “your soul had been marked in ways you couldn’t know about until much later.”

More than 60 years after the end of the Korean War, 25 million North Koreans live in a state that has total power over them and yet can offer them no real order, no real security, with little hope of change. In June the U.N. human-rights chief reported that North Korea was once again on the brink of a massive drought and famine. There’s no limit to the darkness. 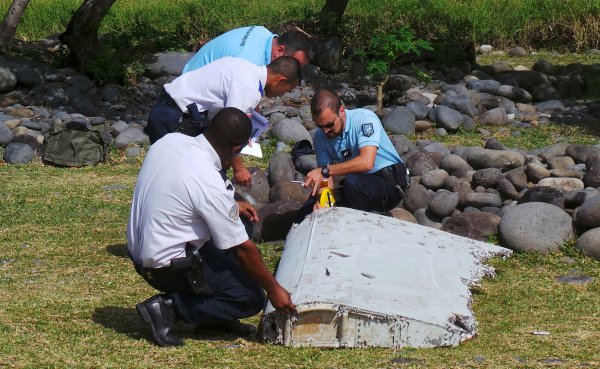 What We Now Know (and Still Don't) About MH370
Next Up: Editor's Pick