The ‘Waze’ and Means of Parenting

I’m not sure which has been a more life-changing discovery this summer: missing my teenager, or realizing that I may have an unhealthy dependence on Waze.

How did these discoveries come about? I miss my teenager because he is working at a sleepaway camp for six weeks, and absence makes the heart forget how aggravating teens can be. And Waze, the crowdsourced traffic app that helps you find weird shortcuts and avoid the police, has made summer driving so easy that I’m now convinced I need its equivalent in every area of my life. Imagine the possibilities: cooking (you’re out of scallions!); laundry (red sock hidden in the load of whites!); getting dressed in the morning (don’t even think about trying to fit into those pants!). My devotion to Waze is so complete that I have even anthropomorphized the faux-female voice into a petite, tough-but-kind grannyish woman–think Dr. Ruth, but a smidge younger and without the accent–who exists solely to make my life better.

My imagination hits a giant roadblock, however, when I apply the app to raising children in general, and teens in particular. Is this a failure of my imagination, or of technology? It doesn’t matter: August is upon us, and the clock is ticking. You see, some women use summer to improve their fitness so they’ll look better on the beach. I use summer to improve my parenting skills so my kids will love me more and choose a nicer inscription to put on my headstone. But can Waze navigate the tricky, unpredictable, dark and winding terrain that’s inside the skull of a teenage boy? I don’t think there’s an app for that.

So I must rely on those things they call books to improve my life, my parenting and my chances of getting a headstone inscription that will reduce even strangers to tears.

I have three sons: one who has made it through his teen years, one who is in the thick of them and one who is still in the single digits. As a test-drive, as it were, I thought I’d focus on my eldest, because I reckon most of my opportunities to screw up a 20-year-old have already happened. I picked up How to Raise an Adult by Julie Lythcott-Haims, the former dean of freshman and undergraduate advising at Stanford University. From Lythcott-Haims I learned that I should strive to be an authoritative parent (“demanding and responsive”) who helps my child experience the state of “flow,” where the rest of the world falls away and he loses all track of time. Oh, and by age 20 my son should definitely be able to schedule his own (irony alert) pediatrician appointments. See, sweetie, I’m not the only one who thinks you need to make that happen.

Then I turned to my teen. This is a boy who has no interest in a gap year and is not the sort who will park it back home after college. Meaning I’ve got about one year at home with him in which to correct all the mistakes I’ve made in the past 17. Such an effort requires significant study, and to the rescue comes The Teenage Brain by Frances E. Jensen, who is the head of the neurology department at the University of Pennsylvania medical school and has two sons of her own who apparently survived into adulthood. From her I learned that the brain matures from the back to the front, that my 17-year-old has a legitimate biological reason for not being able to return a phone call and that I must not be shocked when he does something stupid but can’t tell me why. Hopefully does something stupid does not mean marrying a sociopath or getting a giant face tattoo before his prefrontal cortex is fully developed in his mid-20s. Just eight short nail-biting years to go.

More than anything, the message of Jensen’s book seems to be acceptance. And boy do I wish there were an app for that. After two decades of this child-rearing journey I know I can offer all the directions I want, but my sons are driving. And it’s up to them to figure out where they’re going. I remain a passenger (well, backseat driver) who longs for a clear road map. I’ve stopped hoping Waze is the answer. Still, what I wouldn’t give to hear that calm, supportive voice warn me whenever there is a rough parenting road ahead. 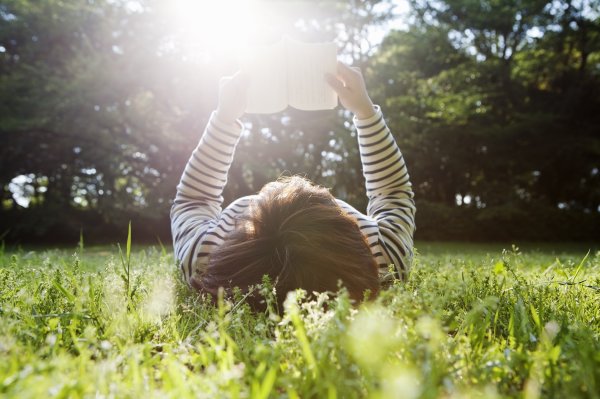 How to Get Your Kids to Actually DO Summer Reading
Next Up: Editor's Pick