Do You Want a President You Can Drink a Beer With?

Hillary Clinton cares about people like you. Just look at her Instagram account, watch her campaign ads, or listen to her speeches. That message has been embedded for months in her clockwork campaign’s every utterance. “I’m running to make our economy work for you,” she says one day. “I will always be in your corner,” she follows up the next. Then, most succinctly, “It’s your time.”

And yet the more she campaigns, the smaller the share of Americans who tell pollsters she cares about people like them. A sweep of public surveys have all tracked declines since spring in her ratings for honesty, trustworthiness and favorability and in the share of the nation that believes she cares. In all of those questions, she is increasingly “underwater,” with less than half the country–sometimes less than 40%, in the case of honesty–acknowledging some basic qualities she claims for herself.

In Democratic circles, this has become a cause for concern and a rationale to entertain a new contender, namely Vice President Joe Biden, the affable, 72-year-old every-guy with a spit-shined 1967 Corvette in his garage. But Biden, who calls himself a “fingertip politician,” doesn’t have better polling to show for himself, and Clinton’s support within her own party still floats in the upper stratosphere.

That leaves Democrats, in the dog days of summer, to ponder general-election doom. Campaigns are stories, with well-coiffed heroes, and no one wants to think their protagonist is a lousy performer. But Democrats now have a front runner trying to re-create Barack Obama’s grassroots movement without a campaign talent like Obama, while the grassroots gets infatuated with Vermont Senator Bernie Sanders, who now polls just 6 points behind Clinton in New Hampshire.

None of this is a cause for blue-state panic just yet. If performance were all that mattered, John McCain would have won the White House in 2000, and Donald Trump would have a lock on the GOP nomination in 2016. No single metric or polling question decides a victor, and each election brings a different electoral environment, with its own formula for victory. Candidates matter, first and foremost, in elections, but so does everything else.

Polling this early in a campaign, before the players are set and the public is paying attention, is almost never dispositive. At Clinton headquarters, her public-opinion magi are adjusting a campaign plan that plays to her strengths, including the prospect of becoming the first female President, while silently acknowledging her weaknesses, by keeping her in intimate settings. The current public polling on trust and caring just doesn’t capture her appeal, they argue. “A lot of the traditional questions are irrelevant from election to election,” explains Joel Benenson, Clinton’s campaign pollster, who helped lead Obama to victory twice. “We are very confident that the attributes Hillary Clinton brings to the table will be what voters are looking for. They want a tenacious fighter.”

There is a lot packed into that phrase, so don’t be surprised if you hear it more in the coming months. Back in 2008, when Clinton battled Obama to a popular-vote draw in the Democratic primaries, her numbers on trustworthiness dived to where they now stand. She had the same cares-about-voters score as McCain, more than 10 points below Obama’s. But on questions of whether she was a “strong and decisive leader,” a traditionally Republican characteristic, she rivaled McCain and easily beat Obama. And on the question, asked by Gallup, of whether she had a “clear plan for solving the country’s problems,” she beat both McCain and Obama, by 7 and 8 points, respectively.

Which means Clinton has her weaknesses, like anyone, but also her strengths. And there are ways for a well-funded campaign to overcome weakness. Most of them are ugly. GOP pollster Glen Bolger, who has been working with a super PAC plotting Clinton’s destruction, predicts that her campaign will come out swinging, as she has in recent weeks with broadsides against Jeb Bush. “If you are not liked,” he says, “you have to make your opponent even less liked.”

That is the fine print on the old campaign maxim. Sure, candidates matter. But not as much as beating your opponent down the stretch. 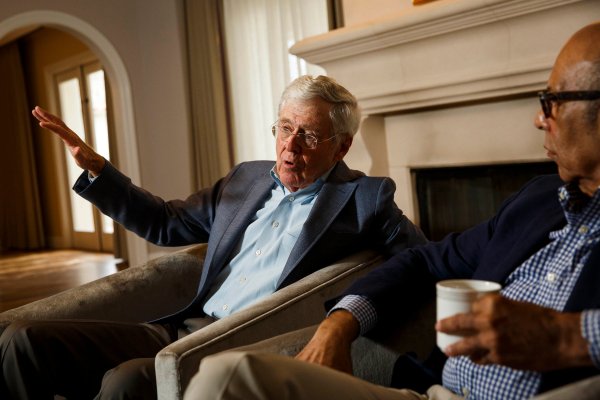 The Koch Brothers Reboot for 2016
Next Up: Editor's Pick