A whole 515 days after Malaysia Airlines Flight 370 disappeared from the skies en route from Kuala Lumpur to Beijing, Malaysian Prime Minister Najib Razak confirmed early Thursday that a barnacle-encrusted fragment of wing that had washed up last week on the remote Indian Ocean island of Réunion, a French territory, was indeed from the doomed flight. “It is with a very heavy heart,” Najib told a press conference organized around midnight in Malaysia, “that I must tell you that an international team of experts has conclusively confirmed that the aircraft debris…is indeed MH370.”

In France, where aeronautical experts near Toulouse were examining the flaperon, as the chunk of the wing spotted on the pebble beach is called, prosecutor Serge Mackowiak used less definitive language, instead saying that there were “very strong indications” that the Boeing 777 chunk was from MH370. (No other Boeing 777s have been reported missing in the Indian Ocean area.)

Najib, whose government has been criticized for fumbling the investigation into the jetliner’s disappearance, said the confirmation of the flaperon’s origins “will at least bring certainty to the families and loved ones of the 239 people onboard MH370,” most of whom were Chinese. The Malaysian leader spoke of the “unspeakable” nature and “torment” of their loss.

But several families of Chinese passengers felt no certainty in Thursday’s announcement — and even less a sense of closure. “I don’t care if they found the wreckage, and I don’t care where the plane is,” says Li Huiyun, whose husband was on the jet. “If they cannot find the bodies and know what happened to our relatives, it’s meaningless.”

Since the March 8, 2014, disappearance, family members have endured ham-fisted coddling from Malaysian authorities. After initial support from the Chinese government, relatives of those on MH370 endured repression when they veered outside of the officially sanctioned parameters of grief. Relatives have been physically harassed by Beijing authorities, one so badly she ended up in the hospital. Others have been detained, some accused of breaking Chinese rules against unapproved public gatherings.

With no sense of what exactly happened, despite search efforts by 26 nations, certain family members have expressed skepticism in the commonly accepted explanation that the plane went down somewhere over the southern Indian Ocean. (Australian authorities are around half-way through combing 46,000 sq. mi. of ocean floor around 1,000 miles west of Perth, and say the discovery of the wing part has not shifted their focus.) “I do not believe the plane is stranded on the sea floor as some people say,” says a woman surnamed Yuan whose husband was also on the flight. (Yuan does not want her full name used or that of the husband she married just a couple months before the plane’s disappearance.) “How can I trust [the investigators]?”

Messages in Chinese chat groups organized by family members speculated whether the plane was actually hijacked by radical Islamic terrorists who secretly landed in the wilds of Central Asia. Others blame the CIA for having somehow captured it. Wu Xia, whose husband was also one of the MH370 passengers, wonders whether some of the passengers even got on board. “I suspect they fabricated the whole thing about the wreckage being found,” she says. “Why did it take so long for them to verify the [flaperon]? I have lost my faith in the investigators.”

It took two years for investigators, working out of the same Toulouse aeronautics center where the MH370 wing part is being examined, to figure out what happened with Air France Flight 447, which plummeted into the Atlantic Ocean in 2009 on its way from Rio de Janeiro to Paris. For the families of the MH370 victims, the wait could be even more extended — a long time to keep the faith.

—With reporting by Gu Yongqiang/Beijing 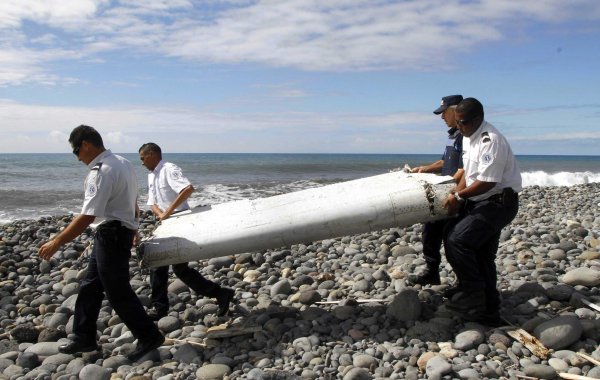 Discovered Plane Debris Is From Missing Plane
Next Up: Editor's Pick