A vendor holds money while selling buttons and t-shirts outside an event where Former Governor of Florida Jeb Bush announced he will seek the 2016 Republican presidential nomination on the Kendall Campus of Miami Dade College in Miami, Florida, U.S., on Monday, June 15, 2015. In an attempt to follow his brother and father into the nation's highest office, Bush announced today that he's running for president of the United States. Photographer: Luke Sharrett/Bloomberg via Getty Images
Bloomberg—Bloomberg via Getty Images
By Aditya Agrawal

Former Florida Gov. Jeb Bush is not shying away from his family legacy in his campaign.

The Republican presidential candidate unveiled a new online store on his campaign website that is offering a $25 T-shirt with the quote: “My dad is the greatest man I’ve ever known, and if you don’t think so, we can step outside.”

His father, of course, was the 41st President of the United States, George H.W. Bush, and his brother was the 43rd President, George W. Bush.

Bush has embraced his family at various points in his campaign, even while trying to chart his own course. “I love my father and my brother. I admire their service to the nation and the difficult decisions they had to make,” Bush said in May. “But I am my own man.”

The cheeky T-shirt is becoming a staple of campaign merchandise.

An entire section of Kentucky Sen. Rand Paul’s website offers products that mock fellow Democrat Hillary Clinton. Products include a “Liberty Not Hillary” T-shirt and sticker, and a “Hillary Hard Drive”, with the description, “You’ve read all about it on the news, now you can get one for for yourself. 100% genuine erased clean email server.”

Former Secretary of State Hillary Clinton’s website offers the “Everyday Pant Suit” T-shirt as an option for those inspired by Clinton’s trademark outfit. Also on sale is a “Future Voter One-Piece” for your infant.

Clinton also channels the feminist within in “The PossibiliTee” shirt. The front of the tee says “We can build an America where a father can tell his daughter, ‘Yes, you can become anything you want to be,” and the back reads “Even the President of the United States.”

Read Next: What Hillary Clinton’s Campaign Can Learn From Etsy 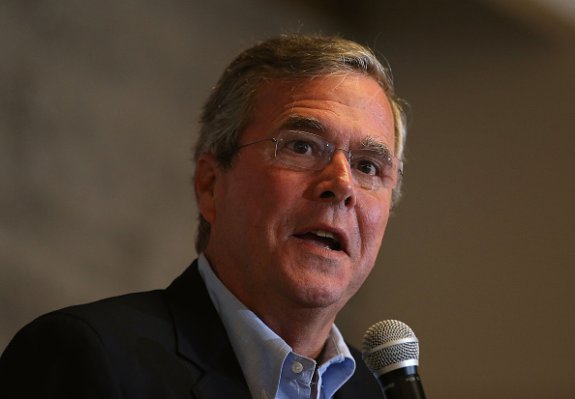