Republican presidential candidate Jeb Bush was trying to defuse Democratic criticism of defunding Planned Parenthood Tuesday when he accidentally opened up a new line of attack.

During an interview at a conference of Southern Baptists, Bush called for defunding Planned Parenthood, then tried to counter the expected Democratic arguments against it by suggesting the money could be redirected to other community health organizations.

But mid-thought, he stopped to muse that the federal government might not need to spend as much as it does.

“The argument against this is … it is a war on women and you are attacking women’s health issues,” he said. “You could take dollar for dollar—although I’m not sure we need a half a billion dollars for women’s health issues—but if you took dollar for dollar, there are many extraordinarily fine organizations, community health organizations that exist.”

That parenthetical thought bounced around on Twitter, where Clinton responded.

On Monday, Senate Democrats blocked a Republican proposal to defund Planned Parenthood, although some GOP senators have vowed to find other ways to strip the organization of the more than $500 million in federal funding it receives to help run around 700 health clinics. Some have even suggested a government shutdown to force the issue.

Bush did not say whether he’d back a shutdown, instead saying he prefers “regular order.”

“I don’t know how many times we have had government shutdowns and budgets not passed,” he said. “If I am president we are going to respect the Constitution and get back to regular order way where democracy works again, where you submit a budget and you work with Congress, you pass a budget, and in that budget I can promise you there will not be $500 million going to Planned Parenthood.”

The debate has come after a series of undercover videos released by a group of anti-abortion activists showed Planned Parenthood officials and others who work with the organization discussing fetal tissue donation. Republicans argue that the videos show the organization breaking federal law, while Planned Parenthood says they are deceptively edited and merely show officials discussing legally permissible reimbursements for minor costs.

The Bush campaign issued a clarification early Tuesday evening which said that he “misspoke” and that he supports fully funding the “countless community health centers, rural clinics and other women’s health organizations” that serve low-income women.

“I was referring to the hard-to-fathom $500 million in federal funding that goes to Planned Parenthood – an organization that was callously participating in the unthinkable practice of selling fetal organs,” Bush said in the statement. 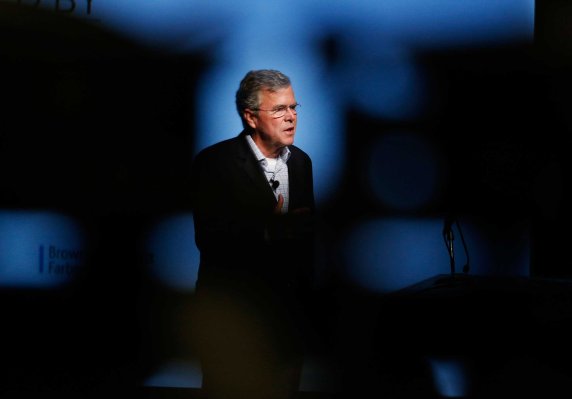 Jeb Bush On His Fundraising: 'Tough Luck' If Critics Don't Like It
Next Up: Editor's Pick