The Intriguing Link Between Spicy Food and a Longer Life

People who love chili peppers might be eating their way to a longer life, according to a new study published in The BMJ.

“We know something about the beneficial effects of spicy foods basically from animal studies and very small-sized human studies,” says study author Lu Qi, associate professor at the Harvard School of Public Health. Some of those preliminary studies have found that spicy food and their active components—like capsaicin, the compound found in chili peppers—might lower inflammation, improve metabolic status and have a positive effect on gut bacteria and weight, he says.

But human evidence remains scant. So Qi and a team of researchers looked at questionnaire data from about half a million adults all across China who participated in the China Kadoorie Biobank study between 2004-2008. Each person in the study reported their health status, alcohol consumption, spicy food consumption, main source of chili intake (fresh or dried, in a sauce or in an oil) as well as meat and vegetable consumption.

The researchers followed up with them about seven years later. Compared to people who ate spicy foods less than once a week, people who ate them just once or twice a week had a 10% reduced risk of death. Bumping up the spice consumption didn’t make much of a difference; those who ate spicy food 3-7 days a week were at 14% reduced risk of death compared to the most spice-averse group.

Eating chili-rich spicy foods was also linked to a lower risk of death from certain diseases, including cancer, ischemic heart diseases and respiratory diseases, they found. Further analysis revealed that fresh chili had a stronger protective effect against death from those diseases.

More research is needed to make any causal case for the protective effects of chili—this does not prove that the spicy foods were the reason for the health outcomes—but Qi finds this observational research valuable. “It appears that increasing your intake moderately, just to 1-2 or 3-5 times a week, shows very similar protective effect,” he says. “Just increase moderately. That’s maybe enough.” 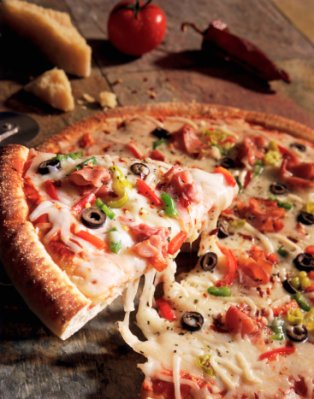 These Are the Worst Pizzas in America
Next Up: Editor's Pick