On National Oyster Day, Why You're Seeing the Tasty Bivalves Everywhere

Ryan and Travis Croxton love oysters, but they are not your average foodies. Back when they first started farming oysters in the Chesapeake Bay, they would run boxes up to New York City on the weekends, then grab hot dogs from street carts after leaving the restaurants they supplied. Restaurants like Le Bernardin.

Though Le Bernardin is no longer a client, their business has come a long way since those early days. The Croxton cousins took the reins of Rappahannock Oyster Co. in 2001, when their late grandfather’s lease to operate on the Rappahannock River bottom was about to expire. More as a nostalgic journey than anything else, they decided to renew the lease and continue the family’s tradition of farming on the grounds. The Croxtons are oyster farmers, not fishermen, so they don’t dredge the bottom of the river for their catch—rather, they submerge cages of tiny oysters from their hatchery down to about one foot above the mud and basically leave them there until they have matured. Two years after they started farming, they were selling 300 oysters per week. This year, they’re selling 185,000 per week. They say their total haul in 2014 was larger than that of the entire Chesapeake Bay in 2001.

Oyster farms like this have been booming on the East and West coasts in recent years, even while the 2010 BP oil spill in the Gulf of Mexico affected harvest in that region. Louisiana’s farmed oyster sales decreased from $28 million in 2005 to $13 million in 2013, while in Massachusetts, sales more than tripled to $11 million, according to the USDA. Washington State, another major oyster-growing region, saw sales double to $81 million.

One Massachusetts oyster farm, Island Creek Oysters, has been a perfect example of the boom. After founder and owner Skip Bennett started the farm in 1992, it took about five years to become profitable—he subsidized the business at the time with wild oyster catch. But since then, it’s all been positive. “No matter how many [oysters] we produce every year,” he says, “it seems the demand increases.” The farm now supplies 450 chefs around the country.

Restaurateurs and their customers love oysters for the briny, savory flavor. And with the newfound popularity comes a new set of standards for judging a good oyster: Bob Rheault, Executive Director of the East Coast Shellfish Growers Association, says, “Thirty years ago, I would have been laughed out of the markets in Boston, Chicago or Jessup [Maryland] if I tried to sell an oyster less than 4 inches [long] … Now, oysters as small as 2.5 or 3 inches are common.”

This shift in preference reflects the newfound taste for oysters that impress with taste, not size. Customers want diverse flavors that reflect the region they come from. With that in mind, the Croxton cousins started a tasting room for chefs to come try their fare called “Merroir,” a play on the French notion of “terroir,” the idea that geography and climate have a fundamental impact on the flavor of wine and food. In summertime, Merroir gets about 3,000 visitors per week.

Oysters can give back to the landscape, too. Aquaculturists (the industry term for any maritime farmers) are quick to point out that unlike other protein sources, oysters just eat the food that’s already in their natural environment—plankton, which requires no replenishing on the producer’s part. Cattle, by contrast, is estimated to take around 15 pounds of feed to produce one pound of beef, and all that feed takes a lot of land and energy to grow. “Oysters, clams, mussels and other mollusks and bivalves are the holy grail of efficiently produced protein,” says Island Creek Oysters president Chris Sherman. What’s more, the oysters pump 50 gallons of water per day to get that plankton, effectively filtering the pollutants out of that water in the process. And in major weather events, like hurricanes, oyster beds can absorb some of the force and soften the blow on coastlines.

Of course, some consumers are wary of eating the thing that’s cleaning pollution out of the water. But oyster farmers stress how strict the USDA guidelines are on their product, and how glad they are to work with regulators to keep the food safe. “If you eat raw anything,” says Sherman, “from sushi to steak tartare [to] lettuce, you’re running a greater risk of food-borne illness. But there’s a cost-benefit analysis with the enjoyment of eating the product raw.”

With sales only on the up and up, it seems the public has weighed the risks to a favorable result. 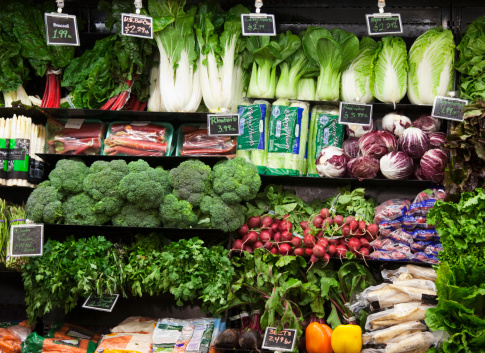 How to Pick the Best Fruits and Vegetables
Next Up: Editor's Pick