Two months ago, Carly Fiorina was dead set on breaking the top ten of national Republican presidential polls, so she could make it on the main Fox News debate stage Thursday night in Cincinnati.

Now, with the first debate just three days away, Fiorina’s campaign is preparing to miss the mark. The former CEO of Hewlett-Packard has struggled in the polls since the beginning of her candidacy, still often clocking in between 1% and 3% in national polls, lower than what she would need to crack the top ten.

Fiorina’s campaign sent around a memo Monday that downplayed the importance of making the main debate stage. “We’ve always acknowledged that debates are important to introduce Carly and speak to voters,” the memo from Terry Neese, her national finance chairman, says. But Neese continues: “We know that what polls say in July or August does not predict what voters will say in 2016. We have built an operation that can go the distance and win. Our strategy does not depend on any one single event to propel our candidate forward.”

Fiorina herself espoused similar sentiments on Saturday, speaking at the Koch-funded Freedom Partners conference: “Truth is we don’t know what debate we’re in yet and we don’t know what polls are being used,” she told Politico. “These national polls mostly measure national name ID. I would also say that at this same point in presidential cycles past, the polls, the pundits, and the money predicted that Jimmy Carter would lose, Ronald Reagan would lose, Bill Clinton would lose, and Barack Obama would lose.”

Fiorina will be on a debate stage Thursday, just likely not the main event. Those GOP candidates who don’t make the main debate stage will participate in a smaller event on Fox several hours earlier. As of now, those in danger of being in the runner-up debate include Fiorina, Texas Gov. Rick Perry, Louisiana Gov. Bobby Jindal, former Pennsylvania Sen. Rick Santorum, and former New York Gov. George Pataki. 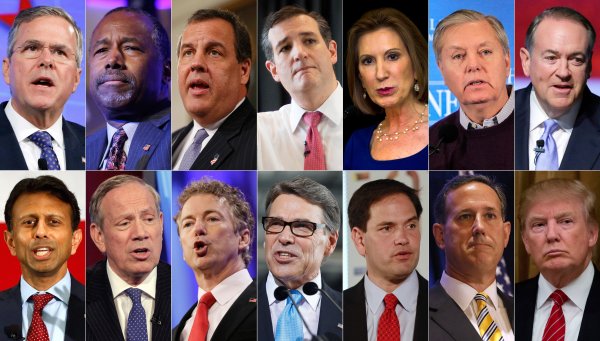 Republicans Brace for Biggest Week Yet
Next Up: Editor's Pick