How Effective Are PTSD Treatments for Veterans?

A new study published Tuesday suggests commonly used first-line treatments for PTSD in veterans may not work as well as medical experts once thought.

The number of American veterans who suffer from PTSD continues to be a serious national public health problem. Recent data show that more than 200,000 Vietnam War veterans still have PTSD, and other research shows that around 13% of Iraq or Afghanistan veterans who experienced combat have PTSD. The numbers continue to climb. As TIME previously reported, PTSD diagnoses among deployed troops grew by 400% from 2004 to 2012.

Now new research, published Tuesday in the Journal of the American Medical Association, reveals that go-to treatments for the disorder may not be as effective as many in the medical community may have believed or hoped. To reach their findings, researchers from the Steven and Alexandra Cohen Veterans Center for Post-Traumatic Stress and Traumatic Brain Injury at NYU Langone Medical Center reviewed 36 randomized control trials of psychotherapy treatments for veterans suffering from PTSD over a 35-year span. Two of the most commonly used treatments—and the most widely studied—are cognitive processing therapy (CPT) and prolonged exposure (PE) therapy.

CPT is a treatment that focuses on changing dysfunctional thoughts, and exposure therapy is meant to help patients face what’s causing them stress and fear.

The research showed that while up to 70% of the men and women who received CPT or PE experienced symptom improvements, around two-thirds of people receiving the treatments still met the criteria for a PTSD diagnosis after treatment. The researchers note that current veterans affairs policies emphasize the use of the two methods as treatments of choice.

The researchers also argued that veterans with PTSD are likely to have worse outcomes from treatment compared to civilians with PTSD. Though the researchers are unsure why that is, there’s some speculation: “Compared to civilian traumas such as car accidents and natural disasters, military deployment involves repeated and extended trauma exposure,” says study author Maria M. Steenkamp, an assistant professor of psychiatry at NYU Langone. “It also involves not just life-threat, but exposure to traumatic losses and morally compromising experiences that create shame and guilt.” Veterans are also more likely to have additional mental health issues such as anxiety or substance abuse, she adds.

The researchers also raise the question of whether focusing on trauma during PTSD treatment is really that effective. Based on their review of the trials, they found that when CPT and PE were compared to non-trauma focused psychotherapy, patients showed similar improvement.

However, not everyone agrees that the findings should be cast in such a light. Dr. Paula Schnurr, the executive director of the National Center for PTSD under the U.S. Department of Veterans Affairs says there’s not consensus that veterans have a more difficult time overcoming PTSD symptoms compared to civilians, and adds that some people who treat veterans feel avoiding fears and trauma perpetuates problems, rather than processes them. In addition, symptom improvement is an important part of PTSD treatment since it improves veterans’ quality of life. Schnurr was not involved in the study, though some of her own research was analyzed in it.

“If a person has a meaningful response, they have a meaningful improvement in their quality of life,” says Schnurr, adding that many treatments for other mental health conditions have similar outcomes. “As scientists we will always try to enhance the effectiveness of these treatments for more people…My takeaway message [from the study] is one of optimism and also encouragement for people to seek treatment.”

The researchers say other treatment options should continue to be explored, and there are practitioners who are trying different methods, from acupuncture to healing touch therapy. Another new study published Tuesday in JAMA looked at 116 veterans with PTSD who either underwent mindfulness-based stress reduction therapy that focused on being present and non-judgmental in the moment or a present-centered group therapy that focused on current life problems. The results showed that those in the mindfulness group had a greater improvement in self-reported PTSD symptom severity. However, they were no more likely to lose their PTSD diagnosis.

There may not be a cure yet for PTSD, but the amount of research looking into how to improve or innovate treatments is encouraging. Veterans who need support can find resources here. 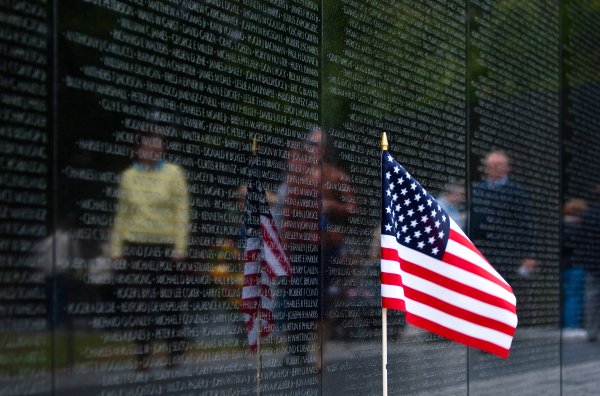 More Than 200,000 Vietnam Vets Still Have PTSD
Next Up: Editor's Pick