Are There Really Benefits to Writing Things By Hand?

Most office-working adults in America spend their days hunched over a computer, tapping at keys to form words on a screen. Very few use a notebook or spend time writing. Even those of us whose professional occupation is “writer” tend to spend far less time writing with a pen in hand than they do typing.

Of course, as with so many things that are perceived as old-timey, writing by hand has become if not a modern necessity, then a trend. Cursive lessons have become all the vogue in some circles and is credited with helping dyslexic students. J. K. Rowling famously wrote the Harry Potter series on napkins. Handwriting has been elevated to the highest levels of art, be it the digitally collected ecriture infinie or Brooklyn Museum’s exhibit on artist Jean-Michel Basquiat’s notebooks.

Jumping on the bandwagon too is Bic, the pen company, which has launched a campaign to get kids to write. Called “Fight for the Write,” the campaign boasts a video featuring a boy inspiring a classroom of kids through a series of “interesting facts” that show the benefits of writing: increased creativity, better critical thinking, boosted self confidence, and a correlated improvement in reading capability with writing prowess.

The creativity claim is most likely a stretch because measuring creativity is nearly impossible. “How are you defining creativity?” James says. “There’s all kinds of ways to: across individuals, ages, contexts—social, academic. It’s really hard to study, so that [claim] is a stretch.”

Intuitively, the idea that handwriting can improve critical thinking makes sense: Writing more would seem to entail thinking more thoroughly about topics and journaling, we know, has been shown to be excellent for introspection. But while writing by hand has been shown to be a good exercise for introspection, the evidence of writing out homework assignments remains very muddled.

As for self-confidence: writing and reading comprehension are neurally connected, and better readers often have more academic self-confidence. “If a kindergartner is reading at a first grade level, they do better academically, which means they have more confidence in their ability to perform,” James says. “The more children write, the easier it is for them to recognize a letter. Letter recognition is the highest predictor to reading later on.”

So there is merit in this claim. But on its own, writing probably does little to boost self-confidence. More likely, James says, is that increased creativity and self-confidence are secondary, correlated effects.

In 2012, James published a study along with her co-author, Laura Engelhardt, that began: “In an age of increasing technology, the possibility that typing on a keyboard will replace handwriting raises questions about the future usefulness of handwriting skills.”

James and Engelhardt found that writing is particularly instrumental in the cognitive development of pre-literate 5 year olds. The kids, who were learning the alphabet, wrote, traced, and typed letters. MRI scans found that the kids who had written letters were able to perceive the letters better, helping them to read at better rates compared to the typers and tracers.

Still, since control groups are impossible in reading and writing studies—you can’t decide to not teach some kids to read or write—“It’s tricky,” James says.

The parts of the brain activated when children learn to write—the left fusiform gyrus, the inferior frontal gyrus and the posterior parietal cortex—are the same that are active in older children and adults when they are reading. James wanted to know whether reading affected writing or the other way around. “That’s why we looked at [pre-literate] kids,” she said. “We didn’t know if reading came first and activated this network for handwriting of if it was vice versa. We found that reading networks are activated when reading happens, and writing uses that network.”

So while the idea of writing by hand and its memory-enhancing capabilities have been covered—and studied—ad nauseum, the effects of writing on other mental indicators are less understood. Research is correlational. “We don’t really have facts, we have evidence,” says James. “But it’s highly suggestive evidence.” 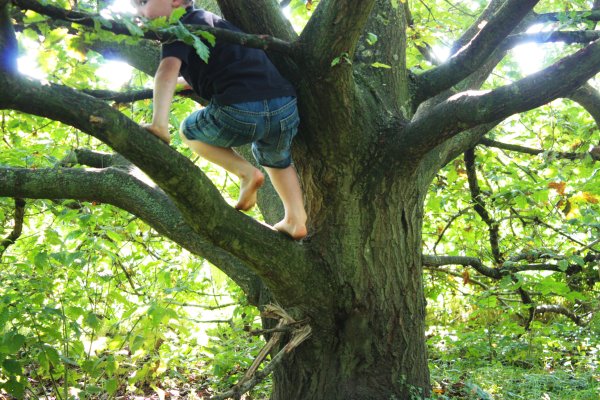 If You Want to Improve Your Memory, Try Climbing a Tree
Next Up: Editor's Pick