Companies owned by GOP frontrunner Donald Trump have sought at least 1,100 foreign worker visas since 2000—a practice that stands in stark contrast to Trump’s self-portrayal as a presidential candidate who would create and project American jobs.

A Reuters’ analysis of Department of Labor data shows that nine Trump-majority-owned companies have applied to bring waitresses, cooks, vineyard workers, and other laborers into the country on foreign worker visas. Most of the visa applications have gained approval, Reuters says. Palm Beach, Fla., resort Mar-a-Lago Club has sought the most foreign workers of the nine Trump-owned businesses. It has submitted applications for 787 workers since 2006. This month, it sought to bring in 70 foreign workers to work as maids, cooks, and servers on H-2B workers later this year.

The visas the Trump companies have relied on the most—H-2B—is a subset of the H-2 visa program that covers nonagricultural foreign workers. (H-2A visas are for farm workers.) The H-2 program is often criticized for leaving workers vulnerable to employer abuses. Last month, a Buzzfeed investigation portrayed the system as one that—at times—fosters modern-day slavery.

Trump has failed to outline a specific economic agenda, but in announcing his candidacy in June, the contender for the Republican presidential nomination said that he “will be the greatest jobs president that God every created. I will bring back our jobs from China, Mexico and other places. I will bring back jobs and our money,” Trump said.

He has since come under fire for lashing out at Mexican immigrants: “When Mexico sends its people, they’re not sending their best,” he said in the speech. “They’re bringing drugs. They’re bringing crime. They’re rapists.” (He later specified that “legal” Mexicans are “incredible people” and have worked for his companies for years.) A poll released Monday found that of 250 Latinos surveyed, 75% viewed the television star and real estate mogul unfavorably.

Labor data doesn’t specify the country of origin for recipients of H-2B visas, but Reuters says that a large number of the foreign workers employed by Trump companies through H-2B visas could be Mexican, since in 2013 more than 80% of the more than 100,000 workers admitted to the U.S. on H-2B visas were from Mexico. 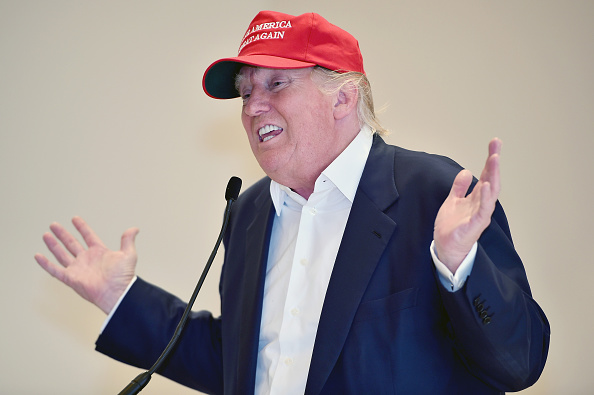